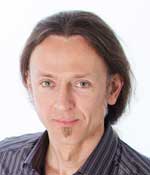 
"For remarkable achievements in the experimental development of spin qubits in silicon."


Andrea Morello, Ph.D., is a professor of quantum engineering at the University of New South Wales (Sydney, Australia), where he also is a program manager at the universityâ€,s Centre for Quantum Computation & Communication Technology. He completed his undergraduate degree in electrical engineering at the Politecnico di Torino (Italy) in 1998, and his Ph.D. in experimental physics at the Kamerlingh Onnes Laboratory of the University of Leiden (Netherlands) in 2004. Dr. Morelloâ€,s research focuses on the design and construction of spin-based quantum computer devices in silicon, and the use of highly coherent spin systems for studies in the foundations of quantum mechanics. He is best known for the first demonstration of single-shot readout and coherent control of the electron and the nuclear spin of a single phosphorus atom in silicon. For these achievements, Dr. Morello is the recipient of the 2013 Malcolm McIntosh Prize for Physical Scientist of the Year, the 2013 David Syme Research Prize, and the 2014 New South Wales Science and Engineering Award. In 2016, he was elected a fellow of the American Physical Society and was named an APS Outstanding Referee. Dr. Morello is chair of the Quantum Information, Concepts, and Coherence focus group of the Australian Institute of Physics, and is an editorial board member for the Institute of Physics publication, Quantum Science and Technology.