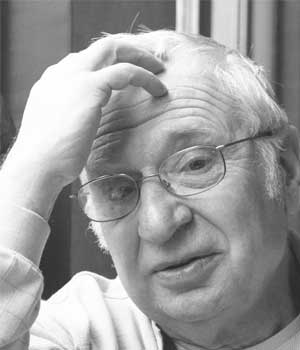 
Alexei L. Efros was born in Leningrad, USSR (now Saint Petersburg, Russia) in 1938. He received his M.S. from Leningrad Polytechnic Institute in 1961 and his Ph.D. in physics from the Ioffe Physical-Technical Institute of Leningrad in 1962. He earned a second Ph.D. in semiconductor physics in 1972. He was awarded the Landau Prize of the Russian Academy, shared with B.I. Shklovskii, in 1986. The main achievements of the Efros–Shklovskii collaboration are the theory of the hopping conductivity of semiconductors, based upon the percolation approach (1971) and the prediction of the Coulomb Gap (CG) in the electronic density of states (1975). The CG has been observed in the voltage dependence of the tunneling current and in the other transport experiments. In 1987-1989, Alexei was associate editor of the magazine Fizika Tverdogo Tela (Sov. Phys. Solid State). He immigrated to the U. S. in 1989 and became a visiting distinguished scholar at the University of California, Riverside. He joined the University of Utah in 1991. He is the recipient of several awards, including the 1997 Humboldt Award for Senior American Scientists, and the Lady Davis Fellowship. He was a member of the board of editors for Solid State Communications magazine from 1987 through 2000. He was named a distinguished professor at the University of Utah in 2005. He returned to Russia to teach at the Academic University of Saint Petersburg from 2015 to 2018. He is a fellow of the American Physical Society.