In 1876, Edward Alexander Bouchet made history by becoming the first African American Ph.D. physicist, and the sixth person ever to obtain a Ph.D. in physics from an American university. His alma mater was Yale, in New Haven, CT, where he had grown up. He had previously made history when he received his bachelor’s degree from Yale, becoming the first African American student to graduate from this university. Additionally, he was the first black person to be nominated to Phi Beta Kappa.

As a doctoral student at Yale, Bouchet pursued research in geometrical optics, with a focus on the refraction indices of various glasses, and completed his Ph.D. in only 2 years. The son of a freed slave, Bouchet went on to a successful and passionate career in physics teaching and he served as a national leader in science education for African Americans. Today there is an APS Award and honor societies at universities from coast to coast in Bouchet’s name, honoring his service to physics teaching, particularly for underrepresented minorities in science.

The “Old Laboratory” where Bouchet conducted his experiments and cemented his legacy sat in the heart of Yale’s Old Campus. The building, which was constructed in1782 as a dining hall, then converted in 1820 to a lab and instruction space, was torn down in 1888, according to Judith Schiff, Yale historian and Bouchet expert, and Jack Harris, associate professor of physics and applied physics at Yale. They found records describing how Bouchet’s dissertation advisor, Arthur Wright, pursued his teaching and research in the "Old Laboratory".

On 7 April 2017, APS past-President Homer Neal presented a plaque to Scott Miller, Yale’s Division Director for the Sciences, to commemorate the site and its ties to Edward Bouchet’s achievements. The plaque reads: “On this site, in the "Old Laboratory", Edward Alexander Bouchet (1852-1918) was the first African American to receive a Ph.D. (Yale, 1876) and one of the first six Americans to receive a Ph.D. in Physics. A native of New Haven, he made a career teaching physics and was a leader in science education for African Americans.”

“The fact that Edward Bouchet was here is a major piece of history for Yale and for the Department of Physics,” said Harris in an article in Yale News. “It’s one of the great historic events in this department.”

Bouchet’s legacy is well-known in the physics community. Born on September 15, 1852 in New Haven, Connecticut, he was the first son and youngest child of William and Susan Bouchet, with three older sisters. His father migrated to New Haven from Charleston, South Carolina in 1824, and his mother was born in Westport, Connecticut. The African American community in New Haven in Bouchet’s youth numbered about 1000 people, and the Bouchet family was active with their local church and the local abolitionist movement, encouraging all the children to get an education. Bouchet attended Artisan Street Colored School and the Hopkins Grammar School, where he was the valedictorian, in preparation for entering Yale.

Living in an era when there were few opportunities for African Americans to pursue education or to secure academic jobs, following his Ph.D., Bouchet was recruited for and accepted a position to teach at the Institute for Colored Youth (ICY) in Philadelphia, where he spent 26 years. Now called Cheyney University of Pennsylvania, it is the nation's oldest historically Black institution of higher education.

At ICY, Bouchet headed the school’s new science program. In addition to physics and chemistry, Bouchet taught classes in astronomy, physical geography, and physiology. An advocate for improving science education, Bouchet repeatedly asked the school’s board of managers to provide laboratory space for students to perform individual experiments. In addition to his regular teaching, Bouchet gave lectures on various scientific topics for students and staff, and even reached out to the wider community, presenting public lectures on science. He was a member of the Franklin Institute and the American Academy of Political and Social Science and was active in the NAACP.

In 1902, Bouchet left the school amidst a shift there toward industrial education, which resulted in the ending of the college preparatory program and the firing or resignation of many teachers from the school. His career took him across the US: he taught mathematics and physics at Sumner High School in St. Louis, Missouri (1902-1905), became Academic Director at St. Paul Normal and Industrial School in Lawrenceville, Virginia (1905-1908), served as Principal at Lincoln High School in Gallipolis, Ohio (1908-1913), and then taught at Bishop College in Marshall, Texas (1913-1916). Bouchet died in his native New Haven in 1918 at the age of 66.

As a dedicated educator and physicist, Bouchet was responsible for introducing hundreds of African Americans to physics. For more than 23 years, APS has honored his service to physics with the Edward A. Bouchet Award. The annual award promotes the participation of under-represented minorities in physics by identifying and recognizing a distinguished minority physicist who has made significant contributions to physics research.

In 2005, Yale and Howard University founded the first chapters of the Edward A. Bouchet Graduate Honor Society, recognizing outstanding scholarly achievement and promoting diversity and excellence in doctoral education and the professoriate. The Honor Society has since expanded to more than a dozen institutions.

“We wish to recognize the achievements of Edward Bouchet, the first African-American Ph.D. in physics, and a prominent educator, who was born in New Haven and received his doctorate from Yale,” said Paul Halpern, a professor of physics at the University of the Sciences in Philadelphia and chair of the APS historic sites committee, as noted in the Yale News article.

Bouchet inspired and gave access to physics education to many people, impacting the physics community and the nation. But then there’s another fact about Edward A. Bouchet that the physics community wants to ensure his successors always remember. Says Harris: “He was off-the-scale brilliant.” 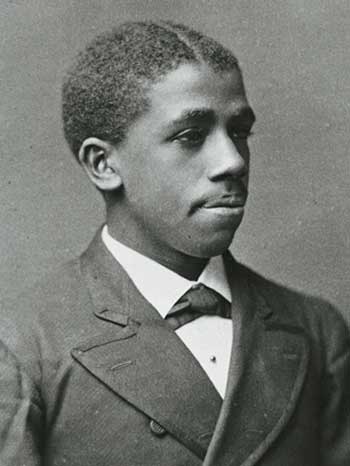