On 8 November 2017, a plaque was presented on the campus of Stanford University as part of the APS Historic Sites Initiative. Unusually, it actually celebrated two distinct locations where several milestone events took place in the history of physics, the groundbreaking work of Felix Bloch and Robert Hofstadter, who conducted research in two different laboratory spaces on campus. As such, the ceremonial plaque was placed midway between the labs, in the courtyard of the Varian Physics Building.

APS President Laura Greene presented the plaque to Stanford Provost and physicist Persis Drell, at the ceremony which was also attended by Senior Associate Dean for the Natural Sciences Kathryn Moler and members of the Hofstadter and Bloch families. Speakers praised the two men not only for their strong emphasis on foundational physics research, but also for their geniality, endless curiosity, and supportive and productive relationships with their students, some of whom were present at the plaque ceremony. The citation reads as follows: “In laboratories near this site, several significant events in the history of physics took place. In 1946, Felix Bloch and his collaborators discovered nuclear magnetic resonance, a crucial tool of modern medicine and science. During 1954–7, Robert Hofstadter and his collaborators conducted nuclear structure experiments that established the size of the proton and neutron for the first time.”

South from the Courtyard, only 500 feet away from where the plaque is located, is a basement room in the Math Corner (then called the Physics Corner) of the Stanford Quad. After studying with Hermann Weyl, Erwin Schrödinger, and Werner Heisenberg, Felix Bloch came to Stanford in 1934, among the many physicists fleeing the Hitler regime. He was Stanford’s first theoretical physics professor, and ultimately, its first Nobel Laureate. Remarkably, Bloch contributed importantly both to experimental and theoretical physics. During World War II, Bloch left Stanford to participate in war projects on radar and atomic energy at Harvard University and Los Alamos National Laboratory. The impact of radar on World War II was profound, and Bloch decided to use wartime advances in radar to enable new discoveries in physics. As Greene noted in the ceremony, “it is no accident that we stand before this laboratory commemorating the brothers Russell and Sigurd Varian’s foundational work on radar: in 1937, they developed the klystron tube, the first significantly powerful source of microwaves.” 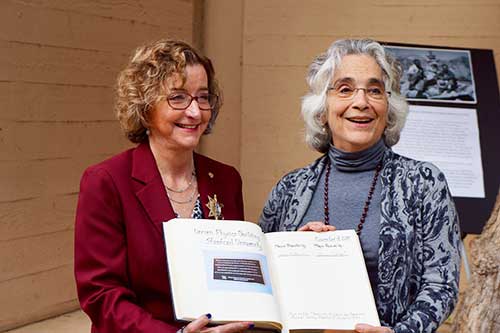 Immediately after his return to Stanford in 1945, Bloch, in collaboration with W. W. Hansen (who was instrumental in the development of the klystron) and M. E. Packard, developed what is now called nuclear magnetic resonance (NMR). Bloch and his collaborators used microwaves to excite the resonance of the magnetic spins within the nucleus. Their 1946 discovery was essentially simultaneous with the work of Edward M. Purcell and his collaborators at Harvard; for this research, Bloch and Purcell shared the 1952 Nobel Prize in Physics. These discoveries not only probed the nucleus in new ways but led to the introduction of MRI as an essential tool of modern medicine.

Five hundred feet to the north of the Courtyard, over the buildings adjacent to Varian Lab, is the Hansen Experimental Physics Lab (HEPL), named in honor of W. W. Hansen. This distinguished physicist invented the linear accelerator, which used microwaves to accelerate electrons to high energies. After his untimely death in 1949, others carried forward his vision. Born in New York City and educated at Princeton, Robert Hofstadter came to Stanford in 1950 as an experimental physicist. Hofstadter participated in the building of the Mark III linear accelerator and its detectors. After 1953, Hofstadter and his collaborators used this machine to probe the proton and neutron, the building blocks of all nuclei, through the way they scattered a high-energy beam of electrons. Their work established that these fundamental constituents of matter were not indivisible but had specific and experimentally determinable sizes, in which they could measure the distribution of electric charge and magnetic force. For this work, Hofstadter received the 1961 Nobel Prize in Physics. “It is safe to say that ensuing developments in our understanding of matter build on the fundamental experimental discoveries for which we honor Hofstadter,” stated Greene.

Although the two physicists worked in different areas of the field, they were close; in an emotional biographical obituary of his friend Bloch, Hofstadter wrote, “He rode the crest of the waves of this great new science. … It can truly be said that he was the father of solid-state physics and one of the great physicists of the 20th century.”

“This plaque and the dedication ceremony is a wonderful recognition of very important work that was done here at Stanford,” said Peter Michelson, professor and chair of physics at Stanford, and former student and colleague of both Bloch’s and Hofstadter’s. He recalls Bloch as being extremely dedicated to his students; Hofstadter invited Michelson to work on the Energetic Gamma Ray Experiment Telescope (EGRET). Another speaker, Stanford Provost Persis Drell, recalled a childhood at Stanford during Hofstadter’s and Bloch’s tenure. “You cannot overstate the impact these men had on making Stanford what it is today,” she said.