On November 30, 2006, as part of its Historic Sites initiative, the American Physical Society presented a plaque to the University of Chicago, to honor Robert A. Millikan. Millikan received the Nobel Prize in 1923 in recognition of two major achievements: measuring the charge of the electron in his famous oil-drop experiment (see “This Month in Physics History,” APS News, August/September 2006), and verifying Einstein's prediction of the relationship between light frequency and electron energy in the photoelectric effect, a phenomenon in which electrons are emitted from matter after the absorption of energy from electromagnetic radiation such as x-rays or visible light.

The prevailing theory in the late 19th century of how charge was produced, held that charge was a type of “strain on the ether,” something that could grow or shrink without restrictions. Faraday’s laws of electrolysis, which were discovered around 1840, provided strong evidence of the quantization of charge, but Faraday never supported the idea. He and most physicists at the time believed that charge, like mass, was an infinitely divisible quantity.

But in 1897, it was realized that cathode rays were in fact tiny charged particles, dubbed “corpuscles” by their discoverer, J. J. Thomson of Cambridge University, and now called electrons. By bending electrons in electric and magnetic fields, investigators could tell that they were negatively charged, and that the ratio of charge to mass, e/m, was the same for all electrons, and about 1700 times larger than that for the ionized hydrogen atom. Thomson believed this was because the charge was the same, but the mass was some 1700 times smaller. Measuring the charge on clouds of water droplets in a cloud chamber, he and his collaborators were able to determine that the charge on the electron, or at least the average charge on the electrons in a cloud, was roughly 10-19 Coulombs (the Coulomb is the unit of charge in the metric system). This was consistent with his hypothesis that the charge on the electron was the same as that found in hydrogen.

In 1906, Millikan began experiments at the University of Chicago to attempt to measure individual electron charges, and with much greater accuracy than Thomson and co-workers had been able to achieve. One of the great improvements was the use of oil drops instead of the cloud of water drops that Thomson used. In Millikan’s apparatus, the water drops would have quickly evaporated, whereas individual oil drops could be studied for a long time. Millikan’s student Harvey Fletcher played an important role in implementing this improvement.

Millikan set up a pair of parallel conducting plates horizontally, one above the other, with a large electric field between them that could be adjusted. A fine mist of oil was sprayed into a chamber above the plates. Many of the droplets would become negatively charged as they picked up some small, unknown number of electrons as they passed through the nozzle. Some of the drops then fell through a hole in the top plate and drifted into the region between the two parallel plates. Lit from the side by an intense light, these drops glistened when the region was viewed through a microscope.

With the electric field turned off, Millikan could observe a falling drop and measure its terminal velocity. This measurement gave him the radius of the drop, and since he knew the density, he could determine the mass. He could then switch on the electric field, and adjust it so that the electric force just precisely balanced the force of gravity on the drop. Knowing the strength of the field and the mass of the drop, he could calculate the only unknown, the charge on the drop. This measurement was repeated many times, and often the same drop would be allowed to rise and fall in the apparatus again and again, as it picked up and shed electrons.

Working with Fletcher, Millikan showed that the charge of the droplets were always a whole number multiple of 1.592 x10-19C, the basic unit of charge. Today, the accepted value is 1.602x10-19C. He published his results in 1913.

In 1915, Millikan experimentally verified Einstein's all-important photoelectric equation, and made the first direct photoelectric determination of Planck's constant h. Einstein’s 1905 paper proposed the simple description of "light quanta," or photons, and showed how they explained the photoelectric effect. By assuming that light actually consisted of discrete energy packets, Einstein proposed a linear relationship between the maximum energy of electrons ejected from a surface, and the frequency of the incident light. The slope of the line was Planck’s constant, introduced 5 years earlier by Planck. Millikan was convinced that the equation had to be wrong, because of the vast body of evidence that had already shown that light was a wave. If Einstein was correct, his equation for the photoelectric effect suggested a completely different way to measure Planck's constant.

Millikan undertook a decade-long experimental program to test Einstein's theory by careful measurement of the photoelectric effect, and even devised techniques for scraping clean the metal surfaces inside the vacuum tube needed for an uncontaminated experiment.

For all his efforts Millikan found what to him were disappointing results: he confirmed Einstein's predictions in every detail, measuring Planck's constant to within 0.5% by his method. But Millikan was not convinced of Einstein's radical interpretation, and as late as 1916 he wrote, "Einstein's photoelectric equation... cannot in my judgment be looked upon at present as resting upon any sort of a satisfactory theoretical foundation," even though "it actually represents very accurately the behavior" of the photoelectric effect. He received the Nobel Prize in part for this discovery nonetheless. 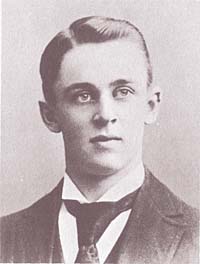 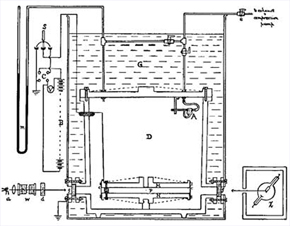 Diagram of Millikan's apparatus, from his Physical Review paper