Before the development of high-energy particle accelerators, subatomic particles were studied using cosmic rays. Cosmic rays are primarily fully ionized nuclei travelling at nearly the speed of light through the interstellar space in our galaxy, and as they cascade through our atmosphere, they produce a shower of elementary particles which can be measured. To minimize the attenuation of primary cosmic rays (mostly protons) by atmospheric interactions, it is desirable to locate detectors at a high elevation, where Earth’s atmospheric overburden is reduced. “It didn't take long for researchers to notice that more [cosmic ray] tracks were visible at higher altitudes,” wrote Robert Stencel, the William Herschel Womble Professor of Astronomy in the department of physics and astronomy at the University of Denver.

Physicists in the U.S. headed west for potential locations of laboratories to capture data about cosmic rays. High in the Rockies, near Denver, Colorado, they found prime real estate at Mt. Evans whose summit is at 4300 m and Echo Lake with an altitude of 3200 m. While Mt. Evans’ higher elevation made it attractive, because of heavy winter snows it was accessible only during the summer, whereas Echo Lake was accessible year-round. In 1930, Arthur Compton, fresh off of his 1929 Nobel Prize win in Physics, visited Mt. Evans “because a new highway was being completed to the 14,000+ ft summit, allowing easy movement of experimental gear,” wrote Stencel.

The investigations that took place at Echo Lake and Mt. Evans had far-reaching consequences for our understanding of the universe and helped verify early conclusions about cosmic radiation, such as that radiation is primarily made of protons, and that the shower of collision products includes electrons, neutrons, positrons, muons and some anti-matter particles. 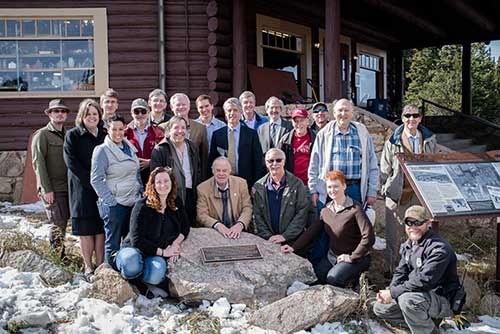 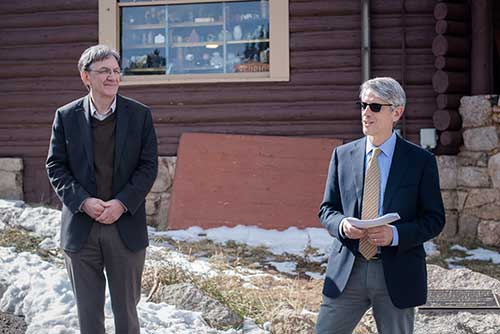 Steven Iona, University of Denver Teaching Professor of Physics, notes that the important research conducted at the sites helped provide evidence that:

Stencel, who also serves as Director of the Chamberlin and Mt. Evans Observatories, adds that “In 1939, an Italian physicist - Bruno Rossi - worked [on cosmic ray] studies at Mt. Evans and was the first to demonstrate the energy dependence of the half life of the mu-meson, thereby providing another piece of proof that Einstein's theory of relativity describes nature (time dilation effects in particular).”

So, when a team of University of Denver physicists nominated Echo Lake and Mt. Evans for the APS Historic Sites Initiative, the suggestion was adopted enthusiastically. On 19 October 2017, APS President-elect Roger Falcone made it official when he presented a plaque to representatives of the school’s science community including faculty, students, the dean of the College of Natural Sciences and Mathematics, and the Vice Provost for Research.

The plaque reads: “Near this site and at the summit of Mt. Evans, fundamental observations of cosmic rays (energetic atom fragments from space that create subatomic particles in the atmosphere) were made between 1935 and 1960 by physicists Arthur H. Compton, Bruno Rossi, and many others, among them faculty at the University of Denver. These experiments included the first measurement of the lifetime of muons, work that confirmed the time dilation effect predicted by Albert Einstein's theory of relativity.”

Research at Echo Lake continued well into the 1960s. In the early part of that decade, both Europe and the U.S. experienced delays in the construction of accelerators of energies of at least 100 GeV. As the flux of cosmic ray protons of greater than 100 GeV at Echo Lake and Mt. Evans was sufficient for serous particle physics studies, a collaboration of largely Midwestern physicists was formed to carry out experiments at Echo Lake and Mt. Evans. This group included Lawrence Jones, Fred Mills, Don Reeder, Bruce Cork, and others.

One important experiment, in 1965, used a counter array to search for fractionally-charged particles, that is, free quarks, following the claim of their observation in a cloud chamber. This experiment, which ruled out the claim, was operated first on the Mt. Evans summit, and then moved to Echo Lake. Other experiments were also completed at the Echo Lake site, with its very large detector assembly. This program was terminated upon the completion of the 200 GeV accelerator at the Fermi National Accelerator Laboratory in the early 1970s.

A brief history of the University of Denver's High Altitude Research Station, or High Altitude Lab, located at Echo Lake and Mt.Evans Colorado:http://mysite.du.edu/~rstencel/MtEvans/echolab.htm