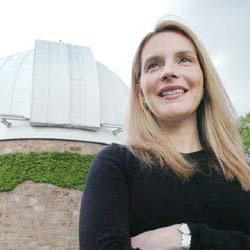 But, after taking an Astronomy 101 course as an undergraduate, Alicia knew that “looking at stars was all [she] wanted to do.”

From there, she began to focus her studies in astrophysics and spent many summers in different observatories doing what she loved most – looking at stars and understanding stars on an astronomical and physical level.

Getting Closer to Answering Age-Old Questions
The profound questions of “Why are we here? Is there life on other planets?” may one day be answered by astronomers like Alicia who conducts research on the supernovas – the catastrophic death of stars – and understanding their role in the Universe.

More importantly, she uses physics in her research on supernovas to better understand what comes before supernovas and how supernovas occur.

Catching a Supernova in Action
Alicia was one of the first astronomers to see a star in the act of exploding, which is a milestone because most supernovas are observed weeks after they have actually exploded. By then, supernovas are seen as small, dull light spots.

While Alicia and Edo Berger, another postdoctoral research associate, were observing a known supernova, they spotted another bright spot in the ultraviolet images that were sent by NASA’s Swift satellite. What Alicia and Edo were observing were two supernovas occurring in the same area – a rare event with a 1:10,000 chance.
Seeing Something Never Seen Before
In addition, when Alicia and Edo studied the x-ray images sent by the satellite, they saw a large, bright spot that indicated that what they were viewing was the explosion of the star. What’s most groundbreaking about their observations is that they actually managed to record the X-ray emissions of the supernova. Previously, scientists thought that the first thing to come out of the beginnings of a supernova would be an x-ray burst, but no one had ever managed to record such observations until Alicia and Edo did.

Because of Alicia’s work, we now know what the x-ray images of supernovas look like.  This means that new devices can be designed to look for supernovas which have not been possible to find before, since astronomers could only previously detect them based on the light they produced that the human eye could see.

Alicia’s observations and x-ray images of a star in the midst of exploding has opened the path for x-ray satellite use and the earlier observation and detection of supernovas. Essentially, Alicia has changed the way that supernovas are studied and has led to the possibility of other discoveries about supernovas.

Stay Focused and Be Determined
One of Alicia’s mentors – Robert Kirshner, a professor of astronomy at Harvard University has said, “There’s nobody who’s more focused and energetic than Alicia Soderberg.” Likewise, Brian Schmidt, the lead investigator of one of the supernova discovery programs that Alicia participated in, has said, “discovering supernovae requires one to remain organized and focused for several 20-hour workdays in a row, something Alicia can do as well as any of the team’s scientists.”

Alicia admits that working with astronomers all over the world and patiently searching for a supernova meant “stress, little sleep and lots of junk food.” But, for Alicia, all of the stress and endless hours of searching are worth it because “it’s thrilling to shout across the room ‘I’ve got one!’ when you spot the first supernova during an observing run.”
99% Hard Work, 1% Luck
While Alicia’s pivotal observations of a supernova may have been partly due to chance, most of her ability to recognize that her observations were important stemmed from being prepared and having the skills to understand what was going on. In addition, Alicia constantly checks her data and images while most scientists “don’t analyze their data for months.” You could say that she was prepared to “[win] the astronomers’ lottery.”