Physicist at the National Institute of Standards and Technology, Physics MS

Natural Aptitude
In high school, Julia appreciated the objective nature of physics problems. The subject came naturally to her, and she went on to study physics and math in college. After graduating, however, she was unsure of the physics career options for bachelor’s degree recipients. As a result, she decided to attend graduate school.

Leaving Graduate School
In graduate school, Julia found a different environment than the nurturing and personal one that helped her thrive in college. She felt that she lacked support and that work-life balance was not valued. “I never felt like I wasn’t smart enough to do it… the things that motivated me did not gel with the things that the university valued,” Julia says. Due to a series of triggers, Julia left graduate school after five years. She had lost her desire to continue; however, Julia still loved physics and hoped to find a job in the field with her master’s degree.

Finding a Physics Job at NIST
After spending two years searching for a career in physics without a more advanced degree, Julia found a position at the National Institute of Standards and Technology (NIST) through word of mouth. “It’s vitally important to maintain networks, even if you have a miserable experience,” Julia says. Her role fell in between that of a staff scientist and a technician. She worked to support users of the neutron facility at NIST; her team helped visiting scientists to have the best chance of taking good data for their experiments. “I was super happy to be back in physics after having taken a couple of years to do other kinds of work,” says Julia. “It was like sort of a customer service role but with a lot of technical content.”

Julia later felt that she was ready for more challenging work. Through her network, she found a different position at NIST in the radiometry group where she focused on troubleshooting a broken spectrometer; however, she was later recruited into the thermodynamic metrology group where she remains today. “I call us the ‘Custodians of the Kelvin in America,’” Julia says. “We’re the people who realize and disseminate temperature from first principles… any sort of temperature measurement device is tied back to measurements that are done either at NIST or at the equivalent of NIST in [another country].”

Making an Impact
Temperature is the second-most-measured quantity behind time, and Julia likes that she plays a role in maintaining the Kelvin as well as the Pascal. She now leads her team, which focuses on temperature, pressure, and humidity. As a manager, she advocates for her team members that report to her and ensures that they have the resources they need for their work. She also finds funding and collaborates with outside stakeholders interested in new measurement techniques.

Julia is currently focusing on a new type of pressure measurement technique that relies on cold atom physics. Past Nobel Prize winners at NIST were pioneers in laser trapping and cooling of atoms, and Julia’s team aims to use their atom trapping experiment as a first principles route for improved measurement in extreme high vacuum.

Julia’s typical day includes office work, meeting with her team members, and working in the lab if time allows. She loves being involved in such a dedicated group; she has to tell her team members to go home at the end of the day. Their infectious energy makes Julia excited to go to work. Although she occasionally has to turn down intriguing ideas for experiments from her team due to time and money constraints, she appreciates their unwavering enthusiasm and understanding. She is pleased to have found the environment of her work at NIST to be the exact opposite of her situation in graduate school.

Interview Current Graduate Students
To attempt to avoid an unpleasant graduate school experience, Julia recommends speaking with as many current graduate students as possible at potential school options. However, if you do find that you are not enjoying your PhD program, she encourages you to make your own happiness a priority, which might mean leaving grad school. “I don’t think getting a PhD is necessarily a meal ticket, and there’s no reason to just prolong your own suffering because you feel like this degree is going to somehow open doors for you. If you’re that miserable, it probably won’t,” Julia explains.

Take Skill-Based Classes
If you are considering leaving graduate school, Julia suggests learning useful skills before quitting. “Take advantage of the opportunity to take up some skill-based classwork,” she recommends. By gaining experience in computer science or engineering, you can strengthen your CV and make yourself more hireable.

Start as a Technician at NIST
If you are interested in working at a place like NIST but you do not have a PhD, Julia advises you to apply to technical staff positions rather than scientific staff positions. Once you are hired, you can move around and find your niche, regardless of your degree. In Julia’s group, about one fourth of the members’ highest degree is a bachelor’s. 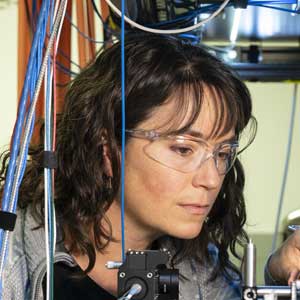