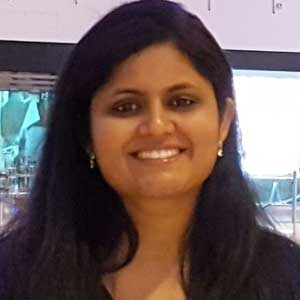 Cultural Influence
Neha grew up in a small town in India. In the region’s culture, a student’s reasoning for choosing a career in science does not typically focus on passion for the subject. Instead, students usually choose to study science to make a living and achieve job security. This aspect of Neha’s culture, along with her family members’ backgrounds in chemistry, first influenced her interest in pursuing science.

Curiosity
Due to her natural inquisitiveness, Neha enjoyed learning about science. “I was always curious about how things work,” she says. Because her school had limited resources, Neha read about demonstrations and experiments in books rather than seeing them live. Despite this disadvantage, she was drawn to the aspect of logical reasoning behind scientific principles.

Neha’s curiosity drove her to study physics in college. During her studies, she realized that she was interested in research and wanted to pursue a career in the field. After graduating, Neha earned her Master’s degree in physics in India. She mainly focused on theoretical work due to the lack of experimental laboratories and resources available in her town.

After earning her Master’s, Neha taught undergraduate physics courses including quantum mechanics and electronics for two years. Neha gained a new perspective through this teaching experience that made her realize that she desired a deeper understanding of physics. As a result, she applied to Ph.D. programs in the U.S.

Deciding to Try Industry
Neha attended graduate school at the University of Alabama where she focused on experimental condensed matter physics. During this time, she noticed that most of the graduates from her university were applying to postdocs; however, she wanted to learn more about working outside of academia.

In particular, Neha wanted to explore industry after earning her Ph.D., although she was unfamiliar with that employment sector. “I wanted to explore real world applications of my research work and get industrial experience,” Neha says. A year before she graduated, Neha accepted a position at Intel Corporation, an excellent company in semiconductor research and powerful technology production.

Career at Intel
During her graduate work, Neha had been using a deposition technique that happened to be part of the process for producing microprocessors at Intel. This experience helped her to land the job. “The skills I learned during my research were really transferable to what I saw in the job profile,” Neha says (for advice on understanding your transferable skills, see our Skills Inventory chapter in our online Professional Guidebook).

Neha worked in Intel’s fabrication facility where she owned one step of the manufacturing pipeline to turn wafers into microprocessors while also researching new production techniques. “Half of the day was working on the equipment to troubleshoot or to resolve any issues related to the process, and the other part of it was working on the new process development—so to conduct experiments, analyze data, or work to understand and improve the upcoming technology,” Neha says.

The biggest challenge of the job was the time commitment. “You have deadlines, you have to do things,” she says. As a Senior Engineer, Neha was often training junior technicians and engineers who could run into issues that required immediate attention; she took turns being on call and would sometimes have to solve a problem in the middle of the night. “The factory doesn’t stop,” she says.

Despite the long hours at Intel, Neha enjoyed the variety of the job and the excitement of creating new processes and technology. “The most interesting part of the job was that there was a new challenge to tackle everyday. It was intellectually stimulating to work on cutting-edge technology to manufacture the next generation of microprocessors,” she says.

Exploring New Opportunities
Neha has recently relocated with her husband and is evaluating options for the next phase of her career. “I’m exploring opportunities in quality and reliability aspects of hardware engineering," Neha says. She also plans to take management courses to better understand end-to-end product cycle.

Learn Multitasking and Time Management Skills
“I think the most important things you learn in industry are multitasking and time management,” Neha says. While working with the advanced machinery at Intel, she had to think on the spot and make strategic decisions to solve sudden problems.

Try New Things
Neha encourages students to take advantage of the nearly limitless career options for physicists and to figure out the most enjoyable position for them. “Any experience is a learning opportunity,” she says. “Don’t be afraid of changes, just try. Skills are always transferable… Keep trying and exploring something new.”

Find a Hobby
Neha also values finding a balance between work and other activities. She recommends pursuing at least one hobby that can fit into your lifestyle and separate you from work in order to maintain that balance.