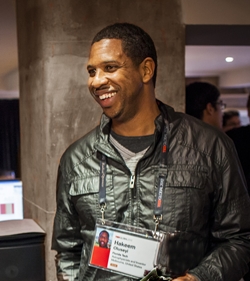 Street Brawls and Science Books
As a child, Hakeem Oluseyi never lived in the same state two years in a row. He moved between rough neighborhoods in the American South, like New Orleans’ 9th Ward and Houston's 3rd Ward, until finally settling in a poor community in rural Mississippi at the age of 13.

"As the new kid in the bad neighborhood, I was always immediately challenged upon arrival, which meant fighting,” Hakeem explains. “I was not interested in this, so I spent a lot of time indoors reading and watching PBS nature shows. I discovered Jacques Cousteau on TV and Albert Einstein in my reading. The effects of relativity just knocked my socks off! I did everything I could to get my head around this stuff. I thought, 'Man! Scientists are super cool!’"

Physics Enthusiast to Physicist
Hakeem’s interest in physics continued into high school, where he created a computer program that did relativity calculations. When his program won first prize in physics at the state science fair, judges told him to become a physicist. Since Hakeem didn’t really know what physicists did, he dismissed the idea and chose to enlist in the Navy. But not long after, Hakeem decided to major in physics at Tougaloo College, a small historically black college in Mississippi.

Four Degrees Later
Now, three degrees in physics and one in mathematics later, Hakeem is a super cool scientist himself- an astrophysicist.

Hakeem did research for the first time at a summer program at the University of Georgia. He was pleasantly surprised by the freedom and responsibility he was given and found that he fit well into the research community, even though he was one of only a few African Americans.

After finishing up with school, Hakeem worked at one of Silicon Valley's most successful companies and did research on manufacturing computer chips. This work earned him 8 U.S. patents and 4 E.U. patents. Hakeem's inventions can be found in the computer chips you use every day.

Stargazer at Heart
Hakeem, however, longed for the big ideas of astronomy and astrophysics, and returned to astrophysics research. He worked with the 2011 Nobel Prize winning Supernova Cosmology Project, developing detectors for a planned space-based telescope that will investigate the nature of the dark energy that is accelerating the universe's expansion.

Today, he is a member of the team developing the Large Synoptic Survey Telescope (LSST), which is America's top priority observatory. He has worked on developing the LSST's camera and is developing programs for analyzing the data it will collect.

Spreading the Love
In addition to astrophysics, Hakeem also has a passion for communicating science to the public.

Hakeem was a professor at the Florida Institute of Technology, and a frequent contributor to the Discovery Channel and National Geographic. He has given multiple TED talks and is regularly invited to speak at science forums all around the world. For his science outreach work, he was selected as a 2012 TED Global Fellow.

“Engaging with a down-to-earth, successful scientist of African heritage encourages the students and lets them see that someone very similar to them can make it as a scientist,” Hakeem says.

Hakeem's drive to spread his love of astronomy globally has brought him into contact with thousands of students from dozens of nations. It also led him to help form the African Astronomical Society and the One Telescope Project, an initiative to supply each nation in the world with at least one research-grade telescope.

TEDxOrlando Talk on The Big Bang

Build a Solid Academic Foundation
When Hakeem first started graduate school at Stanford University, he had to take classes to catch up and felt that he was in over his head.

"It was extremely difficult," Hakeem says. "Whereas I had not even heard of calculus until after I graduated high school and was in the Navy, my Stanford classmates all had calculus early in their high school careers. Moreover, the totality of my entire undergraduate physics education only amounted to about three semesters of the typical Stanford undergrad's coursework."

Nevertheless, support from his research advisor and Hakeem's positive attitude helped him fill in the gaps in his coursework and earn his PhD in 2000.

Find and Engage with Role Models
Hakeem found childhood role models in science shows and books, but knows the power of a personal role model. That's why he is so passionate about teaching and reaching out to the next generation of physics students all around the world.

"I find service to students and humanity as exciting as making a new scientific discovery. That is my life- I educate, I inspire, and I research," Hakeem says. "I have to pinch myself sometimes. I couldn't be happier."

Relativity
The idea, introduced by Albert Einstein in 1915, that even though two observers traveling relative to each other may have different perceptions of time and space, the laws of nature are still uniform and certain properties always remain constant.