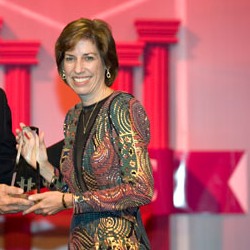 Many Talents, One Main Interest
Multi-talented and well-rounded, Ellen had a difficult time deciding what she wanted to pursue for a career. She grew up playing the flute and thought that she would end up pursuing a music major in college.

But, Ellen’s friends from her high school calculus class were all majoring in science and engineering fields which made her consider taking up a physics major for fun.

Majoring in physics turned out to be a big turning point in Ellen’s life. More importantly, Ellen enjoyed the math of physics and wanted to use her math and physics skills to explain the questions of the world.

The Path of a Budding Inventor
While attending graduate school at Stanford University, Ellen’s interest in physics and engineering started to grow as she began to do research in the area of optics, which involves studying the behavior and characteristics of light. Ellen even got to patent some of her graduate research, which only marked the beginning of her success in optics research and patenting her research.

When she graduated from Stanford, Ellen applied to be an astronaut at NASA. Even though Ellen was doing the application process to be an astronaut, she remained active in optics research at the Sandia National Laboratories and the NASA Ames Research Center where she was able to add her name as co-inventor to two more patents.

The Journey of Becoming an Astronaut
Accomplished inventor and a potential astronaut, Ellen almost made it to NASA’s final cut for astronauts in 1987. In the years before being selected to be a NASA astronaut in 1990, Ellen continued to do optics research, picked up some hobbies, and even got a private pilot’s license.

Ellen’s confidence and persistence led her to become NASA’s first Hispanic female astronaut. As an astronaut, Ellen has gone on four space missions. With each mission, Ellen used her physics and engineering knowledge to study different things ranging from atmosphere changes to space station design.

“I am committed to space flight, human exploration, learning how to do more and more. I like the fact that it is much bigger than myself, important to my country and to the world. I like being able to contribute in this way,” says Ellen.

Life After Space
Spending almost 1000 hours in space is amazing and Ellen will never forget her memories of being in space. After her last space mission in 2002, Ellen moved on to working on space exploration from Earth. She became the deputy director—and soon later director—of flight crew operations at the Johnson Space Center. During her time in this role, she used all of the physics, engineering, and computer skills that she gained over the years to supervise the activities of NASA ranging from space missions to student outreach.

Currently, Ochoa serves on several boards including the National Science Board, and she chairs the committee that evaluates nominations for the National Medal of Technology and Innovation.

Motivation is the Key to Success
“If you are motivated to excel in one area, you are usually motivated to excel in others. NASA looks for that,” says Ellen. Her drive to further her knowledge and work at NASA didn’t go unnoticed and her growth in academics, research, and careers is a clear indication of what persistence can get you.

The Value of Teamwork
Ellen says, “the experience of being on a crew that was working with a team on the ground showed me the value of teamwork. What I learned then applies very much to what I [did as Deputy Center Director], how to manage and how to get the most from everyone on the team.”

Never Stop Learning
Ellen’s drive for success and nonstop learning also influenced her career goals. “I always liked school,” says Ellen, “and being an astronaut allows you to learn continuously, like you do in school. One flight you’re working on atmospheric research. The next, it’s bone density studies or space station design.”

Push On
Ellen’s mother raised all of her children to push for academic excellence. “In our household there was a big emphasis on education. My mom expected us to work hard and do well,” says Ellen.  That message was not lost on Ellen.  She learned to push herself.  Success often comes from pushing ourselves beyond what's easy.