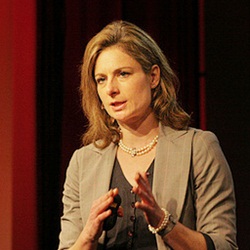 Clear-Cut Answers
When Lisa was young, she liked math because every problem had an answer. Nothing was subjective unlike English, where opinions and answers often varied with interpretation.

Connecting with the World
While she enjoyed math, Lisa soon came to realize that it wasn’t meant to be her ultimate career choice.

Staying up all night to do a math problem just didn’t satisfy her desire to explore her questions about the physical world. After taking her first physics class in high school, Lisa began to feel that science would better nurture her interests and curiosity.

Groundbreaking Ideas and Theories
Lisa has spent most her career exploring the nature of the universe and becoming a leading expert on particle physics and cosmology. In 2004, Lisa was recognized as the most cited theoretical physicist in the world with about 10,000 citations on her work.

When she’s not teaching at Harvard University, Lisa is investigating the possibility of extra dimensions in our universe besides the four dimensions that we already know about. Furthermore, her research extends to studying the interactions of particles and the puzzles and unexplainable phenomena that come along with them.

Bringing Physics to a More General Audience
Lisa’s work isn’t limited to just research and journal writing. She has also written two books on her work, discussing her research in a way that anyone can enjoy and understand. The accessibility of Lisa’s research gives everyone a chance to become interested in the complex ideas of theoretical physics.

As a professor at Harvard University, Lisa also teaches physics to physics majors and non-majors alike. In 2012, she was honored with inclusion in Harvard's Great Teachers video series.

Even further, Lisa has ventured into art by applying physics to art. She wrote the libretto – a script for an opera – for Hypermusic: A Projective Opera in Seven Planes, which is based on her research. Lisa has also co-curated an art exhibit, Measure for Measure, for the Los Angeles Art Association that focuses on the concept of scale and size.

“While using TV and literature to inform the public about science is fantastic, art [gives us] new ways of thinking about things,” Lisa says.

Changing the Physics Playground
In the male-dominated field of physics, Lisa is shaking up the image of a typical physicist. Gone are the days of pocket-protectors and the all-male science world. Lisa is paving the way for women physicists to rise to the top as prominent leaders in physics research.

“If you look through the shelves of science books, you’ll find row after row of books written by men,” Lisa says. “This can be terribly off-putting for women.” Lisa wants more women to get involved in research and become distinguished leaders in their fields.

More importantly, Lisa wants to clear up public misconceptions of scientists as a whole. "Not everyone [fits] this weirdo image that you get for scientists" she says. Lisa can stand behind that statement as an accomplished physicist that defies this stereotype.

“There are some interesting people doing science. And it’s true that sometimes the science itself is abstract, but [these people] are also interested in real-world issues and they are connected...even though the research, in some ways, is very ethereal,” says Lisa.

Dare to Have Bold Ideas
Lisa’s research on exploring extra dimensions and observing evidence of various physics theories has brought about many discussions in theoretical physics. Many of her ideas can change what we know and understand about the universe. While it can be intimidating to probe into theories that haven’t been explored, Lisa enjoys experimenting and investigating an idea to explain various phenomena.

Challenge Yourself
Lisa’s interest in science and math began in high school and her desire to learn about the world hasn’t stopped since then. She doesn’t limit herself to only research and academia, she is also involved in the arts and encouraging new ideas and innovative thinking.