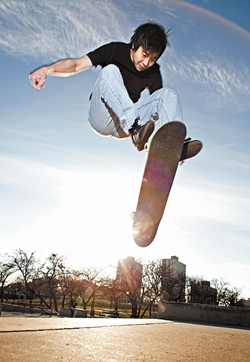 Just His Luck
Tae grew up in Atlanta, Georgia, with an early love for skateboarding. Tae describes his dive into physics as a stroke of luck.

“First, I had a high school [calculus] class that was better than all the math classes I took in college. My teacher, Dean Goldgar, even worked with me outside of class so I could study more advanced math…he was a real mentor,” Tae says.

That class turned Tae onto mathematics. Then in college, Tae stumbled upon a physics class that changed the course of his academic studies, and led him to major in physics.

“This [physics] class was special- it was an honors section that only 8 students bothered to sign up for,” Tae says. “While hundreds of other kids were sitting in lecture halls, eight of us hit the jackpot and had this great professor -Dr. Kurt Wiesenfeld- all to ourselves, 5 days a week. It was personalized, and it had a huge impact on me.”

From Classroom to Conversation
After getting his PhD in Physics from the University of Illinois, Tae spent the next several years as a visiting physics professor at several universities in the Chicago area. By this time, Tae had developed a solid distaste for the lecture hall, the environment he considers one of the biggest pitfalls of the modern university.

“The professor at the podium [makes] no attempt to engage the students who are right in front of him. The most disturbing thing [however] is what the students are doing. They're falling asleep, checking Facebook or email, or, paradoxically, registering for next term's classes, right in the middle of the class they're completely tuning out.”

Tae therefore refused to let his smaller advanced classes follow a lecture format. Instead, he set his classrooms up as workshops where groups of students worked out difficult physics problems and concepts together. This allowed Tae to directly gauge their thinking and give real-time feedback.

Education Revelation
The longer he worked in academia however, the more issues Tae saw in the current education system, particularly in science education.

“Sadly, what most students do in most science classes is nothing like science, but is instead focused on absorbing knowledge handed down by authority...the widespread misconception [is] that memorizing facts is ‘learning science’,” Tae says. “But knowing the Krebs cycle by heart won’t do anything to improve your scientific reasoning skills. Memorizing the order of the planets’ orbits around the sun is about as scientific as memorizing state capitals...Teaching science by authority is the exact opposite of what science education should be."

Tae also believes this problem extends to labs, which should be the ideal environment for teaching and learning science: "the goal [of labs] is often to verify 'known' results instead of engaging in honest inquiry.”

Eventually, Tae decided he couldn't teach the way he needed to at the university level. Before resigning, Tae gave his classes a final lecture entitled "Building a Culture of Teaching and Learning", an explanation of why he felt he needed to leave academia.

Building a Culture of Teaching and Learning

The Skateboarding Physicist
Tae then took his talents and physics know-how to the video game industry, becoming a consultant and controls engineer for two games in the popular Tony Hawk skateboarding game series.

As a consultant, Tae provided game developers with the physics behind skating tricks, allowing them to more accurately simulate them in the game. As an engineer, he revamped the game’s new interactive skateboard controller, which players stand on and move to produce on-screen tricks. Tae used his skateboarding and physics knowledge to completely redesign its control software, making it more reliable and consistent, as well as feel more like actual skateboarding.

When the project ended, Tae's passion for teaching and skating reemerged in an educational web series called “The Physics of Skateboarding with Dr. Tae”, in which he encourages skaters to think scientifically about the sport.

Today, he serves on the advisory board for the Puget Sound Community School in Seattle, Washington. There, middle through high school aged students participate in interdisciplinary learning at their own pace.

“They don't have traditional grades or grade levels,” Tae says. “The goal of the school is to help students discover what they're passionate about and then help them do something with that passion.”

Focus on Learning, Not Grades
"There are no grades in skateboarding. The goal and reward in skateboarding is to learn the trick," Tae says. "Layering grades on that adds nothing to the experience."

Tae believes learning should be the main goal of an education, not "grubbing for grades". The things you truly learn and discover for yourself will outlast a transcript.

Traditional Careers Are Obsolete
“With technology and the world in general changing so quickly these days, you probably won't have a career in the traditional sense,” Tae explains. “I don't have a ‘career’- I work on things that I find interesting, and my training in science has given me that adaptability.”

Knowledge Isn't Like a Cheeseburger
Ultimately, Tae believes the best way to change the current culture of education is to change our perception of teaching and learning as things that only happen in a classroom.

"Knowledge isn't like a cheeseburger. If I have a cheeseburger and I want to share it with someone, I'll have less for myself. Knowledge doesn't work that way. You can share knowledge as much as you want, and you won't lose any of it," Tae says. "There's no good reason to be selfish with knowledge- that's exactly why everyone should be teaching in some capacity. Share what you know."