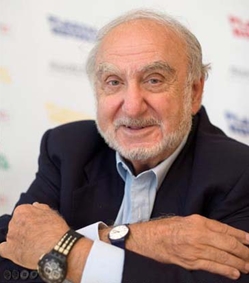 A Change in Plans
Nicolas Hayek was born 1928 in Lebanon and immigrated to Switzerland at a young age. He attended the University of Lyon in France, getting his undergraduate degree in math and physics.

Nicolas planned to study nuclear physics in the US, but his father-in-law suffered a stroke and Nicolas stayed to step-in as head of the family metals business. When his father-in-law recovered, he stepped down. But Nicolas now had a new-found interest in business.

He then created a successful consulting firm, Hayek Engineering, which worked with big companies throughout Germany and Switzerland. In his firm, the majority of Nicolas’s employees were physicists, who he felt were more persistent and willing to push past limits than traditional engineers.

A Swiss Art in Danger
When people think of Switzerland, a few images usually come to mind: chocolate, cheese, and Swiss army knives to name a few. But the Swiss are also famous for another craft- watchmaking.

As things got worse, Swiss banks called in Nicolas Hayek’s firm to look at the situation and find out the best way to shut down the two biggest Swiss watchmakers.

A Wild Idea
As Nicolas studied the industry, he found that Swiss watchmakers were very inefficient. They made very expensive watches aimed at the wealthy. But these wealthy watch buyers only made up a small part of the watch market. Asian companies’ cheaper watches reached a much bigger group of buyers. The process of making Swiss watches was also slow, with many complex parts involved.

Nicolas felt he could turn things around. Instead of shutting down the companies, he merged them and bought a majority of their shares. He was now the owner.

Fantasy Meets Reality
Nicolas began to fix many of the problems he saw. He used his physics and engineering know-how to make watch production more efficient. For example, steps that were normally done by hand were automated. He also reduced the number of parts required to make a watch.

Nicolas also dreamed of making a high-quality watch that was affordable for everyday people. When he suggested the idea, many were skeptical because Asian watches already dominated this market. Even more, Nicolas also insisted that all of the watches be made in Switzerland, which meant the cost of making this watch would definitely be higher than in Asia.

But Nicolas went ahead with his vision, and the Swatch (a combination of ‘Swiss’ and ‘watch’) came to be. These simple, colorful watches became wildly popular and led to the comeback of the Swiss watch market. Nicolas beat out the Asian competition by making his watches a fashion and cultural statement, collaborating with prominent artists to create their designs.

In the process, he kept his promise to keep production in Switzerland. This is very uncommon as most big companies outsource their production to countries where labor costs are less.

A Lasting Legacy
Nicolas Hayek passed away in 2010 at age 82, but his story remains an inspiration to businessmen everywhere. Nicolas was noted for being extremely attentive about every aspect of his business, using his analytic skills and training to make innovative choices.

Even after his success, he continued to invent and innovate, working with Mercedes-Benz to create the tiny and fuel-efficient SmartCar. Its name is a combination of 'Swatch', 'Mercedes-Benz', and 'art'. Like his watches, Nicolas wanted these cars to be colorful, affordable, and efficient.

Be Creative & Take Risks
"In my work I look for new and unusual routes to achieve what on the face of it are seemingly impossible objectives and products. [This is much like] the physicist permanently confronted with the minutest invisible particles and processes, with [a] mysterious and gigantic universe."

Nicolas saw his business and entrepreneurship as an exercise in creativity and invention. He believed it was such a creativity that made an individual an entrepreneur, regardless of their occupation.

Don't Be Quick to Reject Ideas
"We kill too many good ideas by rejecting them without thinking about them, by laughing at them," Nicolas said. Nicolas always believed in hearing out and thinking through ideas before writing them off as impractical or impossible.