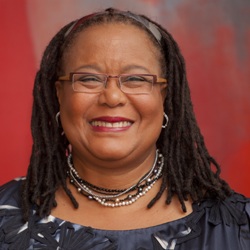 A Curious Mind
“From a very young age I was curious about how things worked in the world,” says Evelynn.

For Evelynn, there was no question that she was more interested in how physical things worked rather than studying questions about biology or plants. Along with understanding the physics of things, she also enjoyed using math to analyze how things worked.

Keeping Up With Technological Changes
As we continue to advance technology and move forward with scientific innovation, it becomes critically important for everyone to understand science and technology.

While Evelynn doesn’t mean that everyone has to pursue a science education, she certainly recommends that everyone should have some kind of familiarity with scientific and technical concepts.

More importantly, she wants people to develop sufficient analytical skills to understand the impact of science and technology on our society as millions and millions of public funds are spent in these sectors every year.

The Feeling of Working In a Lab
Though Evelynn was a student at Spelman College, she took all of her physics courses at Morehouse College. She admits that the best part of her undergraduate career was the summers that she spent in the Bell Laboratories Summer Research Program for Women and Minorities.

It was in this program that she got her first chance to work in a physics laboratory. Evelynn loved working in the lab and she even got to co-author two papers during her summers at Bell Labs. Her summer research experiences motivated her to pursue graduate study in physics.

Working in the Industry
When Evelynn was getting her Master’s in physics at the Massachusetts Institute of Technology, she was most interested in experimental research in solid state and condensed matter physics. After getting her Master’s degree, Evelynn worked for several years as a software engineer with much of her work focusing on application software: integrated email, word processing, calendar systems, and relational databases.

Nowadays, the products that Evelynn was working on are common to every desktop. However, at that time – the late 70s and early 80s – many managers weren’t used to using such tools and there was a lot of resistance. Evelynn thoroughly enjoyed being a part of the application evolution. “It was an exciting time as new application tools were being developed everyday – including Windows. They were leading a profound transformation in how we do our work,” says Evelynn.

Going Back to Academia
Working as an engineer was satisfying, but Evelynn wanted to answer the big questions about how computer technologies were changing our lives. So, she went to Harvard to pursue a PhD in the history of science and to work on questions like how technology was changing our lives from a historical perspective.  Not only did she want to study societal changes, but she also wanted to understand the under-representation of women and minorities in the scientific and technical workforce.

Now, as the Dean of Harvard College she is the manager of all the offices that support undergraduate education, residential life, and other support services for undergraduates. In a greater sense, Evelynn is charged with implementing the vision of a liberal arts education that has been laid out for Harvard College.

Eveylnn’s physics education gave her the ability to think analytically in a very deep way. “I am drawn toward hard problems in the work I do and I use my physics background to think about the kind of evidence I need to support specific policy decisions,” says Evelynn.

Creative Thinking is Valuable
Any job and any employer will require innovative thinking. “Thinking like a physicist is great training for all kinds of careers that require analytical thinking and thinking outside of the box,” says Evelynn.

You’ll Look Smart!
Physics can be a difficult subject to study, but it’s worth it. “If you study physics, people will think you are smart no matter how well you do in your classes,” says Evelynn.