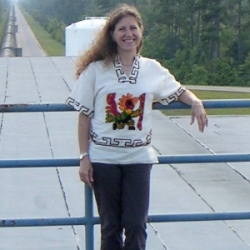 First She Loved Math
Born in Argentina, Gabriela González initially wanted to be a math teacher like her mother. But, when she took her first physics class in high school, she realized that physics was for her.

"I was amazed at how we could ‘explain’ the world with physics and we could predict what objects would do. When I found out this also applied to stars and the universe, and that there were unknown phenomena waiting to be discovered, I decided I couldn’t do anything else!" she says.

Choosing Astrophysics
Gabriela pursued her passion for physics at the University of Cordoba, where she completed her "Licienciatura," a degree similar to a master’s degree in the U.S.

Teaching Physics and Astronomy
Gabriela is currently a professor in the physics and astronomy department at Louisiana State University (LSU). In addition to teaching, she works with the nearby Laser Interferometer Gravitational-Wave Observatory (LIGO) in Livingston, Louisiana.

Studying Gravitational Waves
In her work at LIGO, Gabriela helps create detectors that will allow scientists to verify the existence of gravitational waves, a phenomenon which can’t be observed directly. When two very large, dense neutron stars collide and merge into one, the force of the collision is so great that it emits ripples, called gravitational waves.  These waves eventually reach earth and can provide clues about where they came from and even shed light on the nature of gravity.

The detectors that can pick up gravitational waves are housed in LIGO. These detectors are actually huge versions of a simple device known as a Michelson interferometer. The interferometer splits a beam of laser light, and each piece of light travels down two long perpendicular tunnels that form an "L" shape. At the ends of the tunnels the beams are reflected back to the same point, where they interfere and create unique patterns.

"These ripples...were predicted by Einstein almost a century ago, but have never been directly observed yet," says Gabriela. "The LIGO detectors now being built should be able to detect many events per year." She says that the many observations LIGO expects to yield will bring physicists raw data about black holes: "We'll have a completely new kind of telescope to tell us about the life and death of stars."

Strategies for success
Gabriela’s physics training is essential to her work at LIGO and as a professor, but the concepts aren’t the only useful things she has learned. She says, "The best lesson from [my training] was learning to ask questions—always ask ‘Why?!’"

You could say that Gabriela takes her work home with her: she’s married to a physics professor who also teaches at LSU, Jorge Pullin. But she takes a little time off from unlocking the mysteries of the universe to experiment with cooking different kinds of ethnic food, including Cajun cooking, which she says has not always been successful. She also enjoys knitting complicated patterns.

Brownian Motion
Discovered by botanist Robert Brown, this term describes the seemingly random movement of particles suspended in a fluid. Brown was the first to observe a pollen particle exhibiting random movement in water, although he didn’t know what caused it. Now scientists know that Brownian motion occurs when small fluid molecules collide randomly into a much bigger particle.

Gravitational Waves
Ripples in the fabric of space and time caused by violent events in the distant universe, including the collision of black holes and supernova explosions.

Thermal Noise
When electrons—which carry negative charges—are agitated by heat, they generate "noise" in the form of unwanted currents or voltages that can obscure other signals, like those from gravitational waves.

LIGO
The Laser Interferometer Gravitational-Wave Observatory (LIGO) is a facility dedicated to the detection of cosmic gravitational waves and the harnessing of these waves for scientific research.

Neutron Stars
are extremely dense, made up only of neutrons, and have gravitational fields that are much stronger than that of Earth. Neutron stars are what remain after a star has undergone a supernova explosion.

Jorge Pullin
Jorge Pullin, Gabriela's husband, is a physicist who has made a career of studying a weighty subject: gravity.