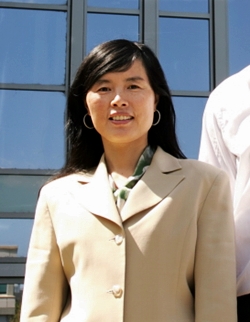 
When Haiyan was growing up in Shanghai, her father would tell her and her sister stories about famous female scientists, including nuclear physicist Chien-Shiung Wu. In a field dominated by men in the 1940's, Chien-Shiung rose up to become a prominent researcher and was even a member of the Manhattan Project.

Stories like these sparked Haiyan’s interest and imagination about the field of physics.

“Having daughters, my father wanted to inspire us,” Haiyan says. “So he told us about accomplished women like Marie Curie and Chien-Shiung Wu and their scientific discoveries.”

In high school, Haiyan also had an influential and supportive female physics teacher.

“She was an educator that did not become a professional physicist herself due to health problems, but she was a very inspiring physics teacher I had for three years…she definitely made a major impact on my decision to study physics,” Haiyan says.

The Mystery of the Neutron
After getting her undergraduate physics degree from Tsinghua University, Haiyan came to the US and got her PhD at the California Institute of Technology. After Haiyan did post-doctorate research at the University of Illinois, she then moved on to a staff position at the Argonne National Laboratory and a tenure-track faculty position at MIT before becoming a professor at Duke University.

Haiyan’s current research revolves around the neutron, one of two particles that constitute an atom’s nucleus. Neutrons themselves are made of three smaller particles called quarks.

Haiyan is studying this internal structure of the neutron to see if its behavior changes when properties like space, time, or charge are reversed. These changes are called symmetry violations.

The Best of Both Worlds
While she continues to unlock the mysteries of the neutron, Haiyan was also appointed chair of Duke’s Physics department in 2011. Although the position brings on new challenges and responsibilities, she believes physics has prepared her to lead and make executive decisions.

“Physics is really about how things work, and as physicists we learn to look at a problem and think ‘what are the issues underlying this problem?’, or ‘how I can I break down and approach this problem?’”, Haiyan says. “When there are different kinds of issues you have to deal with, the way we think really helps.”

Throughout her academic career, Haiyan has also continually taught courses on electromagnetism, mechanics, quantum mechanics and other areas of nuclear physics. Just like the physics teacher that once inspired her, she strives to make the mysteries of the subatomic particles fascinating and accessible to her students.

“To me, helping a student understand physics is just as rewarding as a research breakthrough,” Haiyan says.

Sharing Her Story
Haiyan also travels to local schools to talk about her work and why she loves physics. Her passion is to see changes in American science education.

“One thing that contributes to the difficulty of low diversity in our field is that in the junior high or high school curriculum, physics, for one reason or another, very often happens to be the last science subject students will be exposed to, if they’re exposed at all,” Haiyan says. “It’s kind of backwards, because physics really provides a very basic training and foundation, plus problem solving skills which you will find beneficial when you study other sciences.”

Haiyan also hopes to change the perception of physicists for women in her birth country. She often returns to China to give talks at universities.

“A lot of young women come up after I speak, and really want to know about your life just as much as they do your research. Because in my culture, a lot of them wonder, ‘if I become a physicist, will I still be able to get married and have kids?’. And when I tell them I had my son when I was a graduate student, their eyes open wide and they become very eager to talk to you.”

Don’t be Scared of Physics
“Physics is a lot of fun, and to be sure it is a lot of work. It’s important to enjoy and be passionate about it," Haiyan says.

"A lot of people will tell you and you'll often hear ‘physics is so difficult- maybe you should try something else, something easier’. But if you're interested and you like it, give it a try! Don't be discouraged by others- pursue your own interests first and foremost.”

Do a Post-Doc
Haiyan believes if you’re interested in becoming a professional physicist, a post-doctorate position is crucial.

“To become a professional physicist, post-doctoral training is necessary. When working on your PhD dissertation, usually you don’t get to choose the problem you work on because quite often your advisor has a [designated] doctorate research program with just a few options,” Haiyan says.

“But once you are a post-doc, more than half of the time you can develop your own research program, work on your own idea, and bring it to fruition, so you’re on your way to becoming an independent researcher. I think this period is very crucial for a developing professional physicist.”