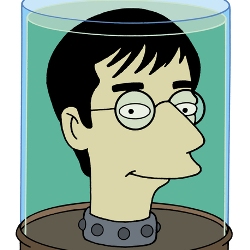 A Science-Oriented Household
David grew up in a house of "natural" science.  Both his parents had PhDs in biology.  Most of the family's activities involved something science-related, whether it was trips to the zoo or trips to the Museum of natural history in New York.

Physics Rebellion
Even though his parents were biology majors, David found that he was more interested in physics and computer science. In some ways, David thinks that his physics major may have come out of “a pathetic form of rebellion against my parents.”

Physics is Eternal
When choosing between computer science or physics for his undergraduate major, David chose physics because it “was more of a fundamental thing to study, with a degree of eternal truth to it that [he] felt computer science did not necessarily have.”

David says, “Physics seemed more unchanging to me, more eternally useful, and I felt like I would have more options afterwards by majoring in physics.”

Writing: A Hobby Put On Hold
What started David’s journey to being the writer and executive producer of Futurama was his own personal interest in humor. With this interest, David wrote comedic essays and became the President of the Harvard Lampoon, which is Harvard’s undergraduate humor magazine. He always thought that writing cartoons was more of a hobby and never imagined that people could actually pursue careers as comedy writers.

After his experience at the Harvard Lampoon, David wasn’t sure what to do: continue his path of science or pursue a career in writing? In the end, he decided to pursue graduate studies before he started to forget everything he had learned as an undergraduate. So, he went off to University of California, Berkeley to pursue a degree in computer science.

Finding a Place in Comedy Writing
David says, “I reached the point in graduate school where I had gotten a master’s degree and was at a dead end on what I had been working on as research, and I would have had to start on something new.” David’s dead end in research led him to consider other options. “It was a good time to think about what I was doing next. The comedy writing won out at that point and I gave it a try,” says David.

With his fondness for writing, David left Berkeley and started writing sample scripts for different TV shows.  One of David’s scripts landed in the hands of Mike Judge, the creator of animated shows such as Beavis and Butthead and King of the Hill, and he invited David to write some of the early episodes of Beavis and Butthead. Soon later, David started writing for The Simpsons and left a couple of years later to launch Futurama with Matt Groening.

The Science In His Writing
On both The Simpsons and Futurama, David admits that he has managed to sneak in some science on the shows. “We try to stick [those jokes] in the background: maybe on a chalkboard if the professor is lecturing, or floating in four-dimensional space if they’re in a weird land of floating equations,” says David.

He loves the fact that Futurama is one of the “few shows that can put in a joke for a physics graduate students.”  While David cares a lot for the science that he can put in the show, he also knows that he has to make sure that entertaining the viewers and keeping up with the story come first. With this in mind, David sometimes alters the science that he puts in the episodes, but he does make sure to “try to come up with an explanation that will amuse scientists, even if it is bogus.”

Along with being able to put in some science into his writing, David says that his physics education made him feel like he “was forced to work very hard, and to think hard and logically, and to try to understand the process behind the correct answer…and those things come in handy no matter what you do.”

Be Committed to Your Work
David is dedicated to being the executive producer of Futurama and takes his position of head writer very seriously. He is involved in the development of every single episode’s script from start to finish.

Not only does he supervise all of the script writing, but he also follows up on the viewers’ comments on each episode. He likes to search around the Internet to see if people may have picked up on the science jokes in the episodes.

Finding the Right Career Takes Time
Sometimes you can go down one path, but somehow end up on another. That’s what happened to David. He started his physics education thinking that he might go into scientific research, but by the time he reached graduate school, he had reached the end of that road.

He decided to pursue a career in his hobby – writing. With his career as a writer and producer for a major animated show, David enjoys using a bit of his physics education to stick in inside jokes in as many episodes as he can.