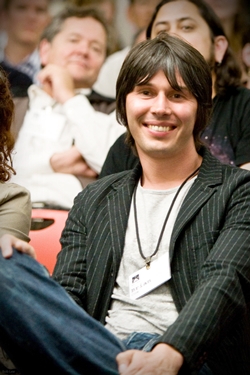 Man on the Moon
Brian Cox grew up in the age of space exploration. Born just one year before the first man walked on the moon, he spent his childhood gazing into the night sky, dreaming of someday traveling to space himself.

As Brian grew older however his interests turned almost entirely to music. He joined a local band Dare as a keyboardist and began to tour and record music with them. During this time schoolwork lost priority for Brian, to the point he failed his college entrance math exam.

From Pop Rock to Particle Physics
When Dare disbanded in 1991, Brian decided to rekindle his love for astronomy.  He attended the University of Manchester to study physics, becoming very interested in particle physics.

He then got roped in as keyboardist for another group, D:Ream,  a pop rock band with many hit songs in the UK. This time however, Brian’s heart was in his research, so when given a choice to go on an international band tour or continue his studies,  he left D:Ream and completed his PhD in particle physics.

Accelerating Physics
Brian now is a researcher at CERN, the organization home to the famous Large Hadron Collider (LHC), the world’s most powerful particle collider. The LHC’s particle collisions provide enough energy to produce a variety of subatomic particles. Studying these particles is critical to a fuller understanding of our universe and the Big Bang. Brian works on several LHC projects, but primarily the ATLAS experiment.

The Face of Science
When he’s not in the lab, Brian is also now a professor at the University of Manchester in their School of Physics and Astronomy.

Brian is best known however as the unofficial ‘face of science’ in the UK. He has hosted dozens of BBC programs and TV specials on everything from the solar system to the science of time. His enthusiasm and straightforward explanations of complex scientific phenomena have sparked a wide interest in science among the general public.

Brian's TED talk on the LHC

Brian on Wonders of the Solar System

Brian has also authored a number of books that explain physics to everyday people.

Many have credited Brian’s efforts and popularity with revitalizing interest in physics among British youth, an idea attributed to a trend of increasing enrollment in physics departments throughout the UK. For his work in science education, Brian has been given numerous awards, most recently the Royal Society's 2012 Faraday Prize.

“The key point,” Brian says, “is to make sure that people understand that science is something they can do. You definitely don't have to be some kind of genius. I think [that’s] a complete misconception. What you need to do primarily is be interested. I was always interested in astronomy, and loads of kids are [because] it's just interesting.”

Join the STEM Quest
“It's all about exploration- whether that's CERN or spacecraft or aircraft,” Brian says. “[Therefore] there's no difference between science, technology, engineering and mathematics, [STEM]. It doesn't matter which one you want do- it’s all the same quest and all of it is vital.”

Don't Fear the Unknown
"It's important to be able to openly admit 'I don't know about [something]' and not be scared about it," Brian says, "but rather to be delighted, and say, 'I'm going to try and find out how that works."

For Brian, this is the scientific approach to life he uses to tackle massive questions such as how the universe came to be.

"When people ask me that, I honestly answer 'I don't know- but here are some ideas and possibilities we're looking into.'"

Set Your Mind to Your Goals
Once Brian found his passion in physics, he went from failing math grades to graduating with first class honors. Even more, Brian has had the privilege to share this love with thousands of people all around the world. And he believes the success and advancement of the human race stems from a similar passion and determination.

“My grandfather was born before the Wright Brothers and he saw us land on the moon. So we went from not being able to fly to landing on the moon in sixty years…if we feel like it, we can do it.”