Fundamental Physics and the Fifth Dimension 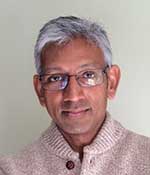 Time and Location: 1:00 p.m., with Q&A to follow in a 1st floor conference room at the American Center for Physics (www.acp.org), 1 Physics Ellipse, College Park, MD — off River Rd., between Kenilworth Ave. and Paint Branch Parkway.

Abstract: The central aspirations, successes and puzzles of Particle Physics will be reviewed, the 2012 discovery of the Higgs boson at the CERN Large Hadron Collider (LHC) illustrating all these aspects. The notion of Naturalness will be introduced as the organizing “gambling” principle behind many searches for new particles and forces beyond the current Standard Model. The interplay between deep theoretical mechanisms of naturalness, such as Extra Spacetime Dimensions, Supersymmetry and Particle Compositeness, and experimental strategies at the LHC and even more powerful future colliders and detectors will be illustrated.

Biography: Raman Sundrum is a Distinguished University Professor at the University of Maryland working in theoretical particle physics, and the Director of the Maryland Center for Fundamental Physics. He obtained his PhD from Yale University in 1990, after which he did postdoctoral fellowships at UC Berkeley, Harvard, Boston University and Stanford, before joining the physics faculty at Johns Hopkins in 2000. He moved to his current position at Maryland in 2010. He is best known for co-authoring the "Randall-Sundrum" scenario for particle physics based on "warped" higher-dimensional spacetime. It has led to many developments in particle theory, string theory, gravity theory, and has inspired a number of experimental searches at the CERN Large Hadron Collider. Dr. Sundrum also works on Supersymmetry, cosmology, and quantum field theory.