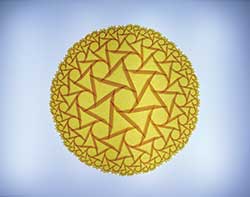 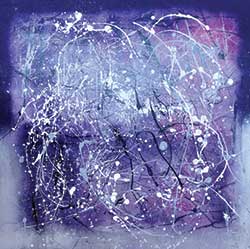 Physicist Thomas Babinec discovered painting as a creative outlet, as in his work "Terpsichore I.” 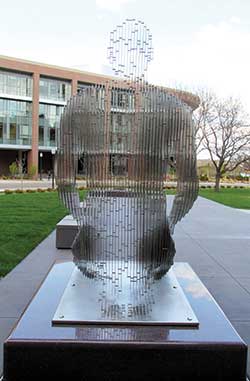 The next time you saunter through a museum or gaze casually at a piece of art, ask yourself: Did a physicist make this? It seems lately that one can’t peruse a science magazine or website without finding articles about scientists who have turned their love of nature into beautiful works of art. And not surprisingly, physicists are numerous among this population. Whether it is art that is steeped in scientific principles, or pieces whose creation requires scientific and technical knowledge, these physicists are leveraging their expertise to craft truly unique art that gives us the opportunity to question our world in singular ways.

Julian Voss-Andreae is a sculptor with a background in physics. When he was a child, he had a very specific career plan in mind: “First I wanted to be a goldsmith, then a chemist and then an artist,” he says. “From early on, art has intrigued me. I was always more interested in the aesthetics and feel of something rather than the intellectual depth of a field.”

But the siren call of science could not be overlooked. By the time he was 22, Voss-Andreae had read many science and math books and had become intrigued with quantum physics. He completed undergraduate work in the subject at Edinburgh University, Vienna University, and the Free University of Berlin, and he pursued a PhD in quantum physics. During that time Voss-Andreae realized he was more interested in the aesthetics of nature and expressing what he investigated via painting (and later sculpture), than conducting the research itself. He left Europe and enrolled in the Pacific Northwest College of Art in Oregon, from which he graduated in 2004.

“In art college, I had a tough time conveying my passion; most people seemed to think science was boring and cold,” says Voss-Andreae. But that same passion gave him inspiration. “It gave me an idea, a niche for my work,” he adds, and in fact, his first sculptures were of protein folds and he has since crafted buckyballs of various sizes. “My teachers said there’s no artist who doesn’t have a day job,” he admits with a chuckle, yet Voss-Andreae has indeed found success — and fulltime work — as a sculptor. His career really took off in 2006 when he partnered with a gallery owner in Idaho who began marketing his works to wealthy collectors with second homes in the area.

Today, almost all of his pieces are commissions and all of them touch science in some way. His most recent project is a pair of sculptures on the University of Minnesota campus, entitled Spannungsfeld, a German word which means “tension field.” The sculptures are of two figures sitting on their knees facing each other across a plaza, and if you glance at them head on, they seem to disappear. They call to mind his earlier work, Quantum Man, which produced the same disappearing visual effect.

Paul Friedlander, a self-described “kinetic light sculptor and scientific artist,” also has a love of physics which evolved as he “grew up in the space race,” he says. With a mother who was an artist and a father who was a physicist at the University of Cambridge, he always envisioned that art and science would be lifelong pursuits but wasn’t sure how they would evolve into a vocation. He studied physics in college, but a chance visit to an exhibition at the Hayward Gallery in London gave him a significant push toward art. The exhibit, entitled Kinetics, included pieces that all related to light. “Art is a very personal, experiential thing for the viewer. It moves you,” says Friedlander. “I just fell in love with the art at the exhibit. That moment changed my life.” He remained in physics to finish his degree and then immediately began his quest as an artist.

His work, which relies heavily on commissions and a few permanent installations, is also deeply influenced by physics, as all his pieces are focused on light. “When I look at light I have a feeling of being uplifted,” says Friedlander, “I feel connected back to my love of the cosmos.” His artistic tools are algorithms, computers, and light projectors, which he uses to design intricate figurines and shapes out of light. Naturally, his physics background aids him in thinking through the artistic and logistic problem of aesthetic expression while the physics itself serves as the subject of the art. For example, for his 2012 “Spinning Cosmos” installation in Montevideo, he collaborated with an astrophysicist to better understand spiral galaxies and then created spinning light sculptures which were lit with the astronomical data. The result was captivating: a room filled with rotating spheres of light with boundaries defined by calculations, formulae, and algorithms all describing the fabric of the universe.

Robert J. Lang, an origami artist who works in both paper and metal and who accepts commissions for both commercial and private collectors, is also a physicist who followed a professional artistic career after his formal science studies. Lang received his doctorate in applied physics from Caltech and worked in industry and for the Jet Propulsion Laboratory for almost 14 years, although he had been doing origami for almost as long as he could talk. “It’s beautiful and elegant that all you need is a sheet of paper.… It was my passion my whole life,” he shares. “I spent nights and weekends on art and the daytime on physics.” But in 2001, the passion became too overwhelming and he quit his job at a Silicon Valley telecom firm to focus exclusively on art. “I continued to [do technology consulting] for a few years, but over that time the opportunities to work on origami continued to grow,” he says.

Many of Lang’s pieces draw directly from nature — for example, he has a whole series of mollusks, dinosaurs, and tessellations. But his work doesn’t exist in a vacuum; indeed, he counts on and even contributes to the advancement of mathematical knowledge on which origami is based. “It touches many fields,” he notes, “including combinatorics, computational geometry, folding theory, circle geometry and computational complexity theory,” and he stays abreast of innovations in these subdisciplines as much as he can. In fact, Lang is a regular speaker at the International Conference on Origami in Science, Mathematics, and Education and is the author or co-author of many papers relating to the mathematics of origami folding. He continues to advance the field and wrote a computer program called TreeMaker, which is used to construct highly complex folds, flaps and angles for the origami base (the main part of an origami model) that are more intricate than anything a person can design by hand. “There’s a tremendous number of relationships between folds,” he describes. “For hugely complicated pieces, we can use mathematical ideas to define interfaces between structures.”

And then there’s Thomas Babinec, a postdoctoral fellow at Stanford University, who is still in the early phase of incorporating elements of applied and engineering physics, art, and business into his life. Unlike the other physicist-artists above, he was drawn to art only very recently: While a postdoc at Stanford, he ventured into an art store to buy a painting kit with a mission to produce art for his apartment walls. But he “discovered a special creative and expressive space with the brush,” he says, and found he couldn’t stop with just a few canvases. Initially he painted only for himself, but after sharing some of his abstract paintings with friends he began getting commissions and requests to sell his pieces. At the same time, he was taking a short course “Stanford Ignite,” at the Stanford Graduate School of Business. So he launched The Art Experiment, a small hobby enterprise that allows him to combine elements of technical, aesthetic, and financial value creation. “I started painting because it was something that made me smile and because it provided a tool to look inwards while I was figuring out myself and my career,” he says. “Now, I am always smiling.”

These physicists count themselves as fortunate to be able to use both the right and left sides of their brains in their professions. But does their physics knowledge ever impede their artistic endeavors? “It radically changes your perception,” says Voss-Andreae, noting how when he first started studying electromagnetism, “I couldn’t look at light reflecting off a puddle and not see the underlying workings of E&M.” However, “I am trying to transcend the purely reductionist view,” he notes. “I’m trying to make myself richer by thinking of the wonder of just looking at something and not having to figure out the physics behind it but at the same time still be in awe of everything.”

Alaina G. Levine is the author of Networking for Nerds (Wiley, 2015) and President of Quantum Success Solutions, a science career and professional development consulting enterprise. She can be contacted through www.alainalevine.com, or followed on twitter @AlainaGLevine.