Didja hear the One About... Celebrating the Art of Bad Physics Jokes 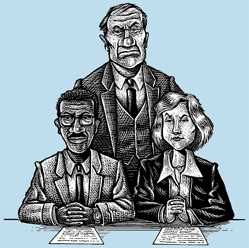 There was a mad social scientist who kidnapped three colleagues, an engineer, a physicist, and a mathematician, and locked each of them in separate cells with plenty of canned food and water but no can opener.

A month later, returning, the mad scientist went to the engineer's cell and found it long empty. The engineer had constructed a can opener from pocket trash, used aluminum shavings and dried sugar to make an explosive, and escaped.

The physicist had worked out the angle necessary to knock the lids off the tin cans by throwing them against the wall. She was developing a good pitching arm and a new quantum theory.

The mathematician had stacked the unopened cans into a surprising solution to the kissing problem; his desicated corpse was propped calmly against a wall, and this was inscribed on the floor in blood:

Theorem: If I can't open these cans, I'll die.

Proof: Assume the opposite...

A physicist, an engineer and a mathematician were asked how much three times three is.

The engineer grabbed his pocket calculator, eagerly pressed a couple of buttons and announced: "9.0000".

The mathematician took a piece of paper and a pencil and sat quietly for half an hour. He then proudly declared: 'There is a solution and I have proved that it is unique!'

A physicist, an engineer and a mathematician were all in a hotel sleeping when a fire broke out in their respective rooms.

The physicist woke up, saw the fire, ran over to her desk, pulled out her CRC, and began working out all sorts of fluid dynamics equations. After a couple minutes, she threw down her pencil, got a graduated cylinder out of his suitcase, and measured out a precise amount of water. She threw it on the fire, extinguishing it, with not a drop wasted, and went back to sleep.

The engineer woke up, saw the fire, ran into the bathroom, turned on the faucets full-blast, flooding out the entire room, which put out the fire, and went back to sleep.

The mathematician woke up, saw the fire, ran over to his desk, began working through theorems, lemmas, hypotheses , you-name-it, and after a few minutes, put down his pencil triumphantly and exclaimed, "I have "proven" that I "can" put the fire out!" He then went back to sleep.

In the high school gym, all the girls in the class were lined up against one wall, and all the boys against the opposite wall. Then, every ten seconds, they walked toward each other until they were half the previous distance apart.

A mathematician, a physicist, and an engineer were asked, "When will the girls and boys meet?"

The physicist said: "In an infinite amount of time."

The engineer said: "Well...in about two minutes, they'll be close enough for all practical purposes."

An engineer, a physicist, and a mathematician are shown a pasture with a herd of sheep, and told to put them inside the smallest possible amount of fence.

The engineer herds the sheep into a circle and then puts the fence around them, declaring, "A circle will use the least fence for a given area, so this is the best solution."

The mathematician puts a small fence around himself and then declares, "I define myself to be on the outside!"

An astronomer, a physicist and a mathematician were holidaying in Scotland. Glancing from a train window, they observed a black sheep in the middle of a field.

"How interesting," observed the astronomer, "all Scottish sheep are black!"

To which the physicist responded, "No, no! Some Scottish sheep are black!"

What is the difference between and engineer, a physicist, and a mathematician?

A mathematician sees no connection between the two.

A farmer, an engineer, and a physicist were all asked to build a chicken coop.

The farmer says, "Well, last time I had so many chickens and my coop was so and so big and this time I have this many chickens so I'll make it this much bigger."

The engineer tackles the problem by surveying, costing materials, reading up on chickens and their needs, writing down a bunch of equations to maximize chicken-to-cost ratio, taking into account the lay of the land and writing a computer program.

The physicist looks at the problem and says, "Let's start by assuming spherical chickens....".

A physicist, an engineer, and a statistician were out game hunting.

The engineer spied a bear in the distance, so they got a little closer. "Let me take the first shot!" said the engineer, who missed the bear by three meters to the left.

"You're incompetent! Let me try" insisted the physicist, who then proceeded to miss by three meters to the right.

"Ooh, we got him!!" said the statistician.

How they knew it was a deer:

The physicist observed that it behaved in a deer-like manner, so it must be a deer.

The mathematician asked the physicist what it was, thereby reducing it to a previously solved problem.

The engineer was in the woods to hunt deer, therefore it was a deer.

And finally, we offer our readers "The Metajoke":

An engineer, a physicist and a mathematician find themselves in an anecdote, indeed an anecdote quite similar to many that you have no doubt already heard.

After some observations and rough calculations the engineer realizes the situation and starts laughing.

A few minutes later the physicist understands too and chuckles to himself happily, as he now has enough experimental evidence to publish a paper.

This leaves the mathematician somewhat perplexed, as he had observed right away that he was the subject of an anecdote, and deduced quite rapidly the presence of humor from similar anecdotes, but considers this anecdote to be too trivial a corollary to be significant, let alone funny.