We received several hundred responses to our announcement of the T-Shirt/Bumper Sticker Slogan Contest in the April 1998 issue of APS News. Many, many submissions played on the familiar theme, "Physicists Do It....." By far the most frequent entry was, Physicists Do It With Models versions of which were submitted by Damian Handzy, W. Yeung, Dirk Jan Bukman, and John Hornstein.

However, frequency of citation is not the sole defining criteria for any given slogan's success. Thus, we've selected a number of our personal favorites as finalists, as well as some additional runners-up. Members are encouraged to review the selections below and vote for their favorites by email [TEESHIRT@aps.org]. Winning entries will appear on assorted T-shirts, bumper stickers and coffee mugs that will be available for sale at the upcoming APS Centennial Meeting in Atlanta, Georgia, in March 1999.
Barrett Ripin
Editor, APS News

FINALISTS
Three of our selected finalists submitted slogans requiring visual clues or graphics that play on popular physics concepts. Eric Weeks of the University of Pennsylvania was the first to suggest a T-shirt with the caption, "Don't Drink and Derive," along with accompanying graphics (see below) [Mike Famiano submitted a similar entry without the graphics.] 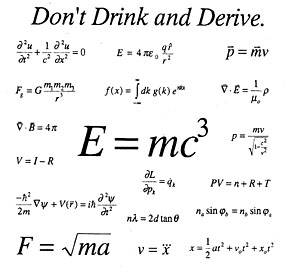 If this sticker is blue, you're driving too fast.

Devlin Gualtieri of Allied Signal suggested the following as an apt slogan for a children's tee-shirt for beleaguered parents.

Roger Johnson of Los Alamos National Laboratory submitted several pages of slogans, many of which we selected as runners-up in addition to his finalist entry:

God does not play dice with the universe. It's more like whiffle ball.

RUNNERS-UP
Other entries along the "Physicists Do It..." lines included:

And finally, from the prolific Roger Johnson:
I'm a physicist; I don't need people skills
Pseudo Science Sucks
Chirality is twisted
Keeper of the hidden variables