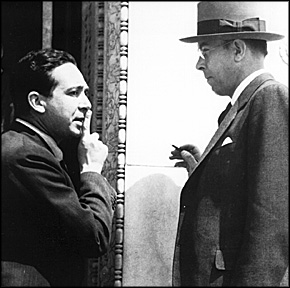 Leo Szilard was born 100 years ago on February 11, 1898, in Budapest, Hungary, and emigrated to the US in 1938. Szilard left Germany in 1933 because of the worsening situation for its jewish citizens He initially planned to study electrical engineering, but switched to physics while studying at the Technische Hochschule in Berlin, Germany. At Columbia University, he repeated the Hahn/Strassman experiment demonstrating nuclear fission and helped compose the letter signed by Albert Einstein imploring Franklin Roosevelt to consider development of a fission bomb. Although known for his contributions to nuclear fission and development of the world's first atomic bomb as a member of the Manhattan Project, Szilard is most remembered for his later efforts to cease research on nuclear weapons and his timeless work toward promoting socially responsible use of science. Szilard was a founding member of the Federation of Atomic Scientists, which worked to keep control of atomic energy out of the hands of the military, as well as the Council for a Livable World in Washington, DC. He later turned to biophysics as a professor at the University of Chicago, developing the chemostat, an instrument that aids in the study of bacteria and viruses by regulating various growth factors. In addition to his scientific publications, he published a collection of science fiction short stories, in 1961.

A Leo Szilard Centennial Meeting will be held this month, February 9-10, 1998, in Budapest, Hungary. It is sponsored by the Hungarian Physical Society and Pugwash and endorsed by the APS. A Szilard Centennial session is also scheduled for at the spring APS Meeting in Columbus, Ohio.

More information about Leo Szilard may be found at www.peak.org/~danneng/szilard.cfm.

Do you have interesting historic photographs of physicists or meetings? Please send them to: Editor, APS News, One Physics Ellipse, College Park, MD 20740. We will see that they get to the Emilio Segr Visual Archives of the Center for History of Physics Niels Bohr Library.

Leo Szilard Award for Physics in the Public Interest 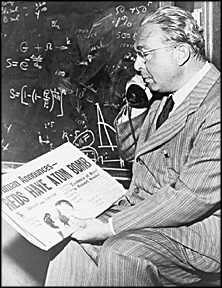 The APS Forum on Physics and Society established the APS Leo Szilard Award for Physics in the Public Interest in 1974 in recognition of Szilard's concern for the social consequences of science.

The Forum has recently launched an effort to establish a $60,000 endowment to convert the Szilard Award into a lectureship award in which the recipients would receive funds to speak about their work at two or more institutions. The objective of the lectureship format would be to provide exposure for outstanding physicists who have applied their science for the benefit of society and, hopefully, act as positive role models. Those interested in making a donation should send their contribution (payable to APS-Szilard Fund) to: Barbara Levi, 1616 La Vista del Oceano, Santa Barbara, CA 93109.