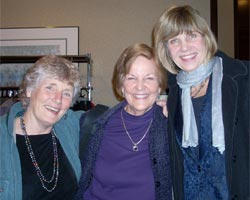 The nine volunteer members of the Committee on the Status of Women in Physics serve as advisors to this program. CSWP was founded in 1972 to address the encouragement and career development of women physicists and sponsors a number of studies, programs and publications.

Currently, women are severely underrepresented in the physical sciences and engineering.[1]  As of 2003, women receive 22% of the BS/BA degrees in physics, but only 18% of the PhDs, and only 5% of full professors in physics were women in 2002. [2]    In addition, women are less likely than their male peers to be nominated for prestigious prizes and awards.[3, 4, 5]. We will need to increase the number of women in leadership positions if we are to attract and retain more women in physical science and engineering.

Support for this program has been received from the National Science Foundation under Award Nos. PHY-0752540 and PHY-­1419913.