With its primary mirrors complete, the Webb telescope is starting preliminary testing at NASA-GSFC

"Failure is not an option." To make sure the James Webb Space Telescope lives up to NASA's famous motto, scientists and engineers from the U.S., Europe, and Canada are rigorously testing its newly completed parts. As successor to the Hubble Telescope, it has large shoes to fill.

After nearly 20 years of construction and assembly, along with an $8.7 billion price tag, the giant 22-foot gold-coated primary mirror was finally erected in the clean room of NASA's Goddard Space Flight Center, in Greenbelt, MD. The flashes of media cameras showered off the 18 hexagonal mirror sections at a news conference on November 2, hosted by NASA Administrator Charles Bolden.

"Some of you that have followed [the Webb Telescope] know that it almost didn't happen, [but] it's mainly because of the people that are sitting here, able to talk to you today, that we're all here and within two years of launch," Bolden said at the conference. NASA has selected October 2018 for the launch.

Almost three times larger than the diameter of Hubble's mirror, Webb's mirror will have seven times the collecting area of the Hubble to observe infrared light from faraway galaxies. Scientists made each of the primary mirror plates out of beryllium to reduce the weight and keep its strength intact, along with a shiny golden coating to improve the mirror's reflection of infrared light. Just before November, the tennis-court-size sunshield layer was completed; the shield is responsible for protecting the main instruments and sheltering the cryogenic mirrors aboard the telescope.

All that's left is to test the accuracy and the durability of the fully assembled telescope. Engineers finalized the preliminary optical measurements, dubbed the "center of curvature pre-test," which uses interferometry to measure the shape of the main mirror. The results are compared to a computer-generated hologram that represents the ideal curvature of the mirror to ensure the quality of the mirror stays intact during testing.

"We have spent the last four years preparing for this test," said David Chaney, Webb's primary mirror metrology lead at Goddard, in a NASA feature article. "The challenges of this test include the large size of the primary mirror, the long radius of curvature, and the background noise. Our test is so sensitive we can measure the vibrations of the mirrors due to people talking in the room."

Up next on NASA’s to-do list includes vigorous shaking and ear-bursting acoustic testing, which will all take place at NASA-GSFC. A vibration test system will simulate a rocket’s blast off, with "shakers" both in the horizontal and vertical that will test the sturdiness of the Webb telescope fully folded into position during its takeoff. It will also be strapped into the High-Capacity Centrifuge, where forces will exceed 10 times the pull of gravity. Following this test, the telescope will enter the Acoustic Test Chamber, where it will be subjected to blasts of 150-decibel sound — close to the level where eardrums burst.

At Johnson Space Flight Center in Houston, Texas, Webb will be folded up and wheeled into the iconic Chamber A — an immense thermal vacuum testing chamber once used on the Apollo mission. For 90 days, the Webb telescope will sit in a tightly sealed vacuum at 11 Kelvin above absolute zero (or about -440 degrees Fahrenheit) to simulate the chilly abyss of space.

"What we get out of [this] test is that we can evaluate whether or not the spacecraft [and] all of its systems preform like they're supposed to once they're out in space," says Mary Cerimele, Chamber A modifications project manager, in a feature NASA article in 2013.

Even as the largest thermal vacuum testing chamber in the world, Chamber A needed some major tune-ups to house the Webb Telescope. With upgrades to its helium system, and liquid-nitrogen system, and airflow management, it can achieve more realistic conditions than ever before in a testing environment.

The ambient air inside the space weighs about 25 tons — to scale, that's the weight of almost 16 Volkswagen Beetles. According to Ryan Grogan, Webb Telescope Chamber A project engineer at NASA Johnson, the mass left inside after all the air is removed "will be the equivalent of half of a staple."

If all tests are "go," the entire telescope will be transported to South America to a launch site close to the equator. Due to centrifugal forces, the speed of the Earth's spin is much faster compared to northern launch sites in the United States, giving the rocket and its precious cargo an extra kick to enter deep space.

Although it's two years until takeoff, the James Webb Space Telescope team and supporters are making milestones happen one step at a time. Keep up-to-date with status reports, testing, and more, at the James Webb telescope homepage. 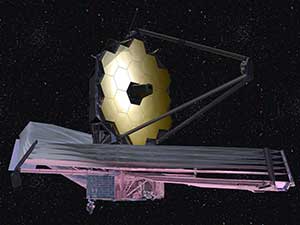