Scholarship Winners Chosen by APS Committee on Women in Physics

The American Physical Society awarded five M. Hildred Blewett scholarships this year to women returning to their careers after a hiatus, the largest number of winners since the beginning of the program.

Chosen by the APS Committee on the Status of Women in Physics, the five include three new recipients and two returning recipients from last year. Amy Daradich of the University of Toronto and Leslie Kerby at Los Alamos National Laboratory first received scholarships in 2013 while Ani Tshantshapanyan of North Carolina Central University, Monique Tirion of Clarkson University, and Lusaka Bhattacharya of Oklahoma State University are new.

The award is given out each year to women who are returning to their careers after they take some time off for family or other reasons. The scholarship is a one-year grant of up to $45,000 that can be used towards a wide range of necessities, including equipment procurement, salary, travel, tuition, and dependent care. This is the tenth year the scholarship has been awarded. 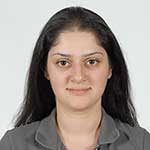 Ani Tshantshapanyan was first drawn to physics during high school in Armenia. “My parents are chemists, they’re also PhDs,” she said. “I grew up in that environment of science.”

She received her PhD in semiconductor physics from the Yerevan State University. At the same time, she had also been working as a laboratory assistant and then as a senior lecturer at the department of applied physics at the Russian-Armenian University, also in Yerevan, Armenia.

Then in 2012 her husband Karen, who also has a doctorate in physics, took a job in Durham North Carolina. “We moved to a different country and finding a secure job was not easy,” Tshantshapanyan said.

She was also expecting her third child when they arrived in the United States. Tshantshapanyan decided to step away from research for a short while to spend some time raising her sons Vahan and Gevorg and her daughter Agnes after she was born in June. “After about one year I started to search for a position,” Tshantshapanyan said.

Through her husband, she found a post doc position at North Carolina State University studying the complex geometry of quantum dots, which have been used in detectors and lasers.

With the help of the Blewett fellowship, she hopes to publish more papers on her research, as well as develop software to further her work. She hopes also to establish contacts with other research institutions near by and ultimately find a private company to collaborate with to commercialize the kind of quantum dots she’s been helping to develop. 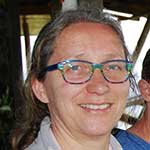 Monique Tirion is returning to physics in order to work on better understanding the dynamics of proteins. X-ray crystallography is a well-established method for studying the makeup of proteins that make life possible. However it turns out that scientists have only been seeing part of the story.

Using software she has been helping to develop, she has been able to calculate the normal vibrational modes of the different proteins based on their shapes. The work has helped explain some of the finer points of how these protein systems behave.

“It’s not an easy computation but if you carry it through the insights you gain from it can be very exciting,” Tirion said. “The static images really can’t elucidate how all of these little mysteries are resolved.”

She said she’s always been driven by her fascination with the biological sciences and trying to understand how the world works and what makes things happen. “It’s just a natural evolution,” Tirion said. “The world around us is so astounding, the trees and the flowers and whatnot. My effort to understand that naturally came to this scale, this nanoscale where I’m working at.”

Tirion attended Texas A&M University for her undergraduate degree in physics, and then Boston University for her PhD. There she met Daniel Ben-Avraham, her future husband. Shortly after receiving her doctorate, her husband took a job at Clarkson University in upstate New York. The two moved to the small town of Potsdam, and a short time later her son Yoel was born.

It wasn’t obvious at first, but Yoel was born with a number of health issues that required a lot of attention, including eczema, a number of severe food allergies and asthma. “All three individually take some effort to supervise, but all three at the same time was a bit overwhelming so I decided to give it my full attention,” Tirion said.

She carefully monitored his diet and homeschooled Yoel until he started the 7th grade. Today he is much healthier and in an advanced college prep program where he’ll get college credit for his senior year of high school.

With Yoel doing well, Tirion has been able to return to research. With the Blewett support, she hopes to take the recent work she’s been doing on proteins even further. 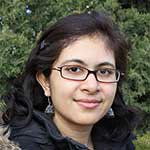 Lusaka Bhattacharya grew up in India and had always been interested in the sciences. “Physics is very interesting to me because in physics you have mathematics, and you also have a theoretical part and you have an experimental part,” Bhattacharya said. “My mom is also a mathematician so I decided that that means I would study physics.”

She studied theoretical nuclear physics at the Saha Institute of Nuclear Physics in India and received her PhD from the University of Calcutta in 2012. Studying nuclear physics there, she focused on studying quark gluon plasma, and traveled a great deal to present her work around the world. She traveled to universities and research institutions in Israel, Germany, Spain, Switzerland, Finland and the United States.

“It is a very new field so you can explore a lot,” Bhattacharya said. She added that the idea of learning about what made up the universe just an instant after the Big Bang was what attracted her to the field.

While working on her doctorate, she met her husband and the two married in 2010. He finished his degree early and traveled first to Helsinki then Oklahoma for his post-doc work. After Bhattacharya finished her doctorate in 2012, she moved to Oklahoma to join her husband. “My husband is a theoretical physicist like me, but it is very difficult to get a post doctoral position in the same university,” she said.

It was the first time the two had been able to live in the same city for an extended period of time. Bhattacharya decided to take some time away from research and start a family. Earlier this year, her first son was born. “Now he’s almost nine months old so now I think I should start my career again,” she said.

She started volunteering at Oklahoma State University to collaborate with her mentor at Kent State University. She’s helping to develop a photon probe for detecting when quark gluon plasma has been created in accelerator collisions.