A new top-level government report urges the United States to become more of an international player in the field of high-energy physics. 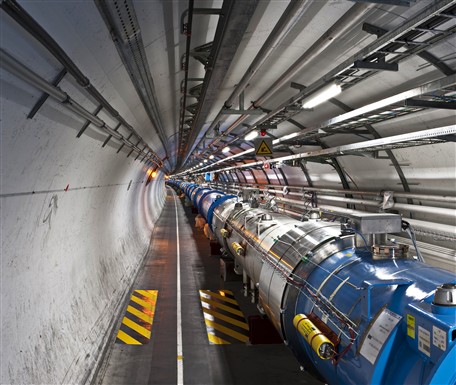 The Particle Physics Project Prioritization Panel, referred to as P5, submitted its draft outline for the next decade of science experiments funded by the National Science Foundation and the Department of Energy's Office of Science on May 22, recommending programs to boost, continue or cut.

"It's more than a collection of cool experiments," said Andrew Lankford, chair of the Department of Energy Office of Science's High Energy Physics Advisory Panel (HEPAP). "It's a ten year strategic plan that's been put forward."

One of the top recommendations in the report is that the United States internationalize its biggest planned physics experiment, the Long Baseline Neutrino Experiment.

The project, to be renamed the Long Baseline Neutrino Facility, looks for neutrino oscillations by shooting a stream of neutrinos from 800 miles through the Earth from Fermilab to a giant detector buried almost a mile underground in Lead, South Dakota. Projected budget shortfalls have dogged the project, putting the underground detector in jeopardy.

The report also recommends international investment in the upcoming high-luminosity upgrade for the Large Hadron Collider and some level of support for Japan's International Linear Collider, depending on available budgets.

"Particle physics is global," said Steven Ritz of the University of California, Santa Cruz and chair of P5. "The United States and major players in other regions can together address the full breadth of the field's most urgent scientific questions if each hosts a unique world-class facility at home and partners in high-priority facilities hosted elsewhere."

Though large projects are best for international consortia, the report's authors envision a leading role for the United States in a number of small and medium sized projects. It recommends increasing efforts to develop a range of second-generation dark matter detectors, the Large Synoptic Survey Telescope, and Cosmic Microwave Background experiments.

"Several medium and small projects in areas especially promising for near-term discoveries and in which the U.S. is, or can be, in a leadership position, will move forward under all budget scenarios," the report said.

To help develop this capacity, the panel also urged investing more in building new experiments, by upping the fraction of office's construction budget from 16 percent to between 20 and 25 percent.

However a number of other projects were targeted for termination. These included NuSTORM, RADAR, CHIPS and LAr1 neutrino detectors, the MICE and MAP muon experiments and the ORKA kaon experiment. In addition, the report recommended development of the Dark Energy Spectroscopic Instrument move forward provided that the overall budget increases by at least 3 percent per year.

The P5 largely built their recommendations off the lengthy Community Summer Study 2013, popularly known as "Snowmass on the Mississippi." The nine-day-long seminar brought together hundreds of physicists from a range of disciplines within high-energy physics to weigh in on the future of tie field. They produced a comprehensive, several-thousand-page-long report that highlighted outstanding research questions, recommended directions for research and possible future experiments.

The P5, appointed by HEPAP and last convened in 2008, has been reviewing the Snowmass report and assembling their recommendations for the Department of Energy's Office of Science since September.

DOE charged the panel to come up with recommendations for the next ten years under different budget scenarios: flat for three years, then 2 percent growth over seven years; two percent growth for the first three years followed by seven years of 3 percent growth, and an "unconstrained budget" which essentially asked the panel to come up with a program for the U.S. to lead the world in high energy physics. The difference between the first two budgets is about $500,000 over ten years.

For more information on the P5 meeting, visit the High Energy Physics Advisory Panel meeting page. A copy of the report is available online.