On November 22, President Barack Obama bestowed the nation’s highest civilian honor on physicist Richard Garwin at a ceremony at the White House. Garwin, 88, was recognized for his long career in science and his public service in providing advice to policymakers since the late 1950s. He is a Fellow of the American Physical Society and winner of the APS Leo Szilard Lectureship. In 2003, he received the U.S. National Medal of Science from President George W. Bush.

Garwin received his Ph.D. in physics from the University of Chicago in 1949 at the age of 21 under the supervision of Enrico Fermi. In 1952, he joined the newly created IBM Research Laboratory and remained with IBM since that time. He became an IBM Fellow in 1967, and his research has ranged from particle physics to condensed matter physics with forays into nuclear magnetic resonance and computer technology.

In 1950, Garwin became involved in thermonuclear weapons research at Los Alamos National Laboratory and in 1958 became a consultant to the President’s Science Advisory Committee, joining the committee as a full member from 1962-1965 and again from 1969 to 1972. Since 1966, he has been a member of the elite JASON Defense Advisory Group and a large part of his career has been devoted to issues surrounding nuclear arms control and nuclear proliferation. A documentary film about Garwin’s life and career was released in 2014.

In his remarks in presenting the medal, President Obama said: "Reconnaissance satellites, the MRI, GPS technology, the touchscreen all bear his fingerprints. He even patented a mussel washer for shellfish — that I haven’t used, the other stuff I have. Dick has advised nearly every president since Eisenhower, often rather bluntly. Enrico Fermi, also a pretty smart guy, is said to have called Dick the only true genius he ever met."

The Back Page, August/September 2006 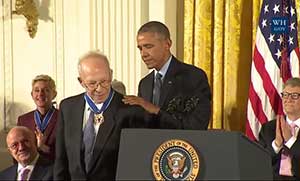