After the beginning of a thaw in U.S. relations with Cuba, scientists discuss prospects for collaboration with our southern neighbor 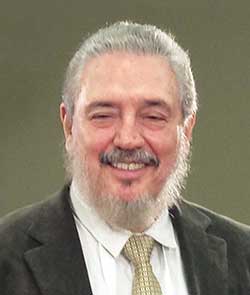 The historically icy relationship between the U.S. and Cuba has begun to thaw, making scientific collaboration with our southern neighbors more feasible, thanks to eased constraints on travel and the loosening of certain financial restrictions. In December 2014, President Obama announced that the U.S. and Cuba would work to normalize relations, and this March, President Obama visited Cuba — the first visit by a sitting U.S. President in almost 90 years.

The U.S. embargo of Cuba, which has been in place for more than 50 years, has made doing science in the country a challenge, said Fidel Castro Díaz-Balart — the son of Cuban revolutionary Fidel Castro — at a session at the APS March Meeting on physics in Cuba, organized by the APS Forum on International Physics.

In spite of the conditions, scientists in Cuba have soldiered on. Now, Castro Díaz-Balart said, "The normalization of relations with the United States certainly will provide grounds for improving the conditions in the research in the field of physics, because we had had a lot of problems to acquire the newest technology in the labs and to train our undergraduate and postgraduate students."

Cuba is home to around 1800 physicists, said Castro Díaz-Balart. Around two hundred of those physicists have Ph.D.s — with the majority in solid-state physics and nuclear physics — and around 800 physicists are active in research.

Castro Díaz-Balart is himself a physicist; he earned his PhD from the Kurchatov Institute in Moscow. He is the Vice President of the Cuban Academy of Sciences, and serves as scientific advisor to the state council of Cuba.

Cuba's scientific strengths lie largely in biotechnology and the medical and pharmaceutical sciences, said Castro Díaz-Balart. The country boasts six doctors for every thousand inhabitants, and has a life expectancy similar to the United States. Cuban scientists have developed vaccines against hepatitis B and meningococcal meningitis B and C, and other drugs, including a treatment for diabetic foot ulcers. And Cuba's Pedro Kouri Institute of Tropical Medicine has worked on the front lines in efforts against diseases like Zika, dengue, and Ebola.

The country is also strong in the nuclear sciences. In the 1980s, the country worked toward establishment of its first nuclear power plant. However, the U.S. embargo eventually forced Cuba to abandon these plans. In the late 1990s, nuclear research in Cuba began to be redirected to non-energy applications, including medical physics and theoretical nuclear physics.

Cuban physicists are involved in a number of international collaborations, at the ALICE experiment at CERN, with the Joint Institute for Nuclear Research in Dubna, Russia, and the International Center for Theoretical Physics in Trieste, Italy.

Current nanotechnology research in Cuba overlaps closely with the country's expertise in biopharmaceuticals, and includes work on nanovaccines for diseases from cancer to dengue, using nanotechnology to improve drug delivery and for diagnostics, and studying the impacts of nanoparticles on the environment and on human health.

The country's achievements thus far in nanotechnology are the result of creating "a vision and strategic planning," Castro Díaz-Balart said. "We built our development on the existing strength in medical and biopharmaceutical industries." Some of the necessary equipment for such research was already available, for example.

Nobel laureate David Gross, another speaker at the session on physics in Cuba, noted the unique role that science can play in promoting cooperation between countries in the search for the universal secrets of nature. "My experience is that with all the barriers that bureaucracies and governments put up, scientists find some way to go around them, and have an enormous desire to interact with other scientists," Gross said.

Despite having been isolated by the U.S. embargo for so long, Gross said, "Cuba has a vibrant scientific community with very ingenious people who have managed to create a lot in spite of enormous difficulty."

After the recent steps to normalize relations, it will be easier for U.S. and Cuban Scientists who wish to spend time in each others' countries, said Deputy Science and Technology Adviser to the Secretary of State Frances Colón, who also spoke at the session. "I do see more and more requests from scientists on both sides to spend time in each other's research institutions."

"Cuban science is open for business and they want to collaborate with you," said Colón. "Give it a closer look."