By Abhishek Agarwal and Samindranath Mitra

The editors of Physical Review Letters, who have a ringside view of emerging research directions, are seeing more papers that address condensed matter physics with techniques and ideas from quantum field and string theories, often with authors from both communities. So, when then Editor in Chief Pierre Meystre launched the “Physics Next” series of workshops on topics that are “beginning to emerge from the noise,” the overlap of quantum field theory and condensed matter physics was a logical choice.

The workshop took place in Riverhead, Long Island in August. The scientific program was designed by Subir Sachdev, a condensed matter physicist at Harvard who often collaborates with high energy physicists, and John McGreevy, a string theorist at the University of California at San Diego who now focuses mainly on condensed matter physics. Around thirty early, midcareer, and senior theorists and experimentalists gathered over three days to discuss four broad topics — topological phases, many-body localization and quantum chaos, anomalous transport, and gauge and gravitational dualities. 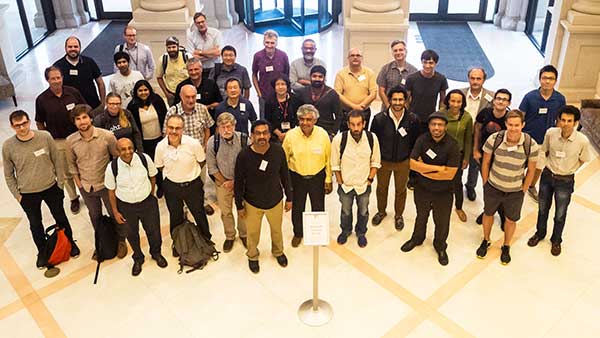 Relativistic quantum field theories are a suitable framework for the study of several intriguing properties of recently discovered materials, such as the Dirac and Weyl semimetals. These condensed matter systems are fundamentally nonrelativistic, but some of their physical properties are described by equations that assume a relativistic form with an emergent velocity (e.g., the Fermi velocity) playing the role of the speed of light. For example, negative magnetoresistance in certain semimetals can be understood as a manifestation of chiral anomaly — the same phenomenon that accounts for the decay of neutral pions in particle physics. Physicists typically study such physical phenomena with large colliders, so being able to do so in living-room-sized laboratories is an exciting prospect. With this goal in mind, theorists and experimentalists at the workshop discussed several new points of contact between relativistic field theory and condensed matter physics.

Another agenda topic was the propagation and dissipation of quantum information — lying at the heart of some of the hardest issues in physics, such as the black hole information paradox. Several theorists presented ideas for probing fundamental issues in quantum mechanics within the context of many-body physics as well as progress in understanding the growth, diffusion, and scrambling of quantum information. Experimentalists at the meeting surveyed schemes for testing related ideas, many of which would have been considered theoretical speculation only a few years ago.

Several presentations were on a particular theoretical nonrelativistic many-body system — the Sachdev-Ye-Kitaev (SYK) model. In its conventional formulation the SYK model describes interacting Majorana fermions, but certain limits of this model are believed to encode the dynamics of black holes embedded in a curved two-dimensional space (known as the 2D anti-de Sitter space). Such black holes arise within string theory with enticing connections. Theorists from the condensed matter, high energy, and nuclear physics communities were among those who discussed the scope of the SYK model. It seems that experimental implications of the SYK model may yet open a door to studying black hole phenomena in condensed matter physics labs.

Our hope in organizing these workshops is to foster increased collaboration across traditional subject boundaries. The topics discussed at the August workshop, of which the ones cited above are but a sampling, should assuage our concerns regarding increasing specialization. As one of the experimentalists noted at the end of the three days, the workshop was successful in living up to its name — helping the editors of the Physical Review journals to keep up with what is next in physics.

Abhishek Agarwal is an associate editor of Physical Review Letters. He received his Ph.D. from the University of Rochester in 2005. Abhishek's research interests lie in the study of gauge and string theories.

Samindranath Mitra is an editor of Physical Review Letters. He received his Ph.D. at Indiana University (Bloomington) in 1994, where he worked on the theory of the quantum Hall effect.