A research team has stored a short digital movie inside the DNA of live bacteria. DNA — our genetic information-bearer — is known to have the potential for encoding information at high density. In 2013, scientists managed to encode 739 kilobytes of information into a synthetic strand of DNA, sufficient to store simultaneously all 154 of Shakespeare’s sonnets, one image, and a 26-second excerpt of Martin Luther King’s "I have a dream" speech. Now, Shipman et al. have further boosted DNA’s information carrying capacity, reporting in Nature (DOI: 10.1038/nature23017) the first archiving of a movie inside a living cell. The researchers first encoded the black-and-white pixels of the movie’s frames into the four "letters" of a DNA strand — the A, G, C, and T nucleobases. Using the new gene-editing technique called CRISPR, they then placed the DNA into an E. coli bacterium. The movie’s frames could later be retrieved by sequencing the cells’ DNA. The stored movie was Eadweard Muybridge’s The Horse in Motion, a groundbreaking motion picture recorded in 1878 through stroboscopic photography. With the new DNA technique, the authors found they could accurately reconstruct each frame of the movie. 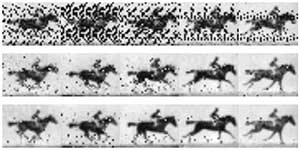 A decade-long study of a distant galaxy has uncovered the first evidence of orbital motion in a pair of supermassive black holes (SMBHs). This type of black hole — often more massive than a million stars — is found at the center of many galaxies, including our own, but only a handful of SMBH pairs have been observed so far. The radio galaxy 0402+379 hosts the closest known SMBH pair, estimated to be 24 light-years apart. Researchers monitored 0402+379 from 2003 to 2015 with the Very Long Baseline Array, which is a system of ten radio telescopes spread across the U.S. An analysis of this data by Bansal et al., presented in the Astrophysical Journal (DOI: 10.3847/1538-4357/aa74e1), shows that the black holes are moving relative to each other. From our planet’s vantage point, the detected motion is a sluggish 1.6 microarcseconds per year. By making assumptions about the orbit’s shape, the researchers estimate that it will take 28,000 years for a full revolution. At this rate, the pair will not be merging anytime soon, but astronomers continue to hunt for evidence of SMBH mergers, which are predicted to be powerful sources of gravitational waves. 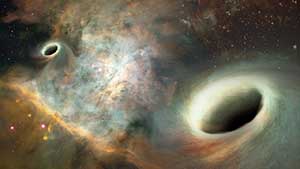 Proton is Lighter than Expected

A new measurement of the mass of the proton is the most precise to date and at the same time significantly disagrees with the previous consensus value. Heiße et al. report the result, which they obtained by comparing the motion of a single proton in a magnetic field to that of a carbon ion, in Physical Review Letters (DOI: 10.1103/PhysRevLett.119.033001). The researchers stored a proton in a Penning trap, a special configuration of electric and magnetic fields, and measured its cyclotron frequency, which is proportional to the ratio of charge to mass. They compared this to the cyclotron frequency of a 12C6+ reference ion to derive the proton mass with a precision of 32 parts per trillion, and were confronted with a surprise: the proton mass value differs by three standard deviations from the CODATA value (an international compilation of physical data). The value of the proton mass is a key parameter in many aspects of chemistry and physics. The authors next plan to improve the experimental precision by reducing field inhomogeneities in the Penning trap — the main source of systematic error. For more, see the Synopsis in Physics, “Proton Loses Weight.”

Cell phones, computers, and even watches are capable of keeping you online 24/7. To protect privacy, information is encrypted with the help of true random number generators (TRNG), which create a random series of 0s and 1s that encode your data. But as technology becomes sleeker, smaller, and more powerful, it is more difficult to fit TRNGs into microcircuits. Researchers have now found that combining carbon nanotubes with static random access memory cells can create true random bit streams. As Hersham et al. report in NanoLetters (DOI: 10.1021/acs.nanolett.7b02118), they exploited the natural thermal fluctuations that occur in carbon nanotubes to digitize high and low voltages into bits (high voltage = 1, low voltage = 0). Their circuit passed a series of rigorous checks, including a National Institute of Standards and Technology test suite. The team’s work could pave a path for the development of low-cost and widely applicable security devices for next-generation electronics. 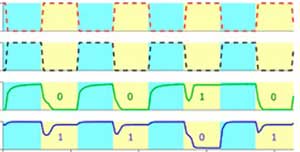