Relying on his background in physics and years as a bike-builder, Zinn followed an unconventional career path, tying physics and bike mechanics together to bring cycling science to the general public. "Bicycles are all just physics and math problems really," Zinn said. 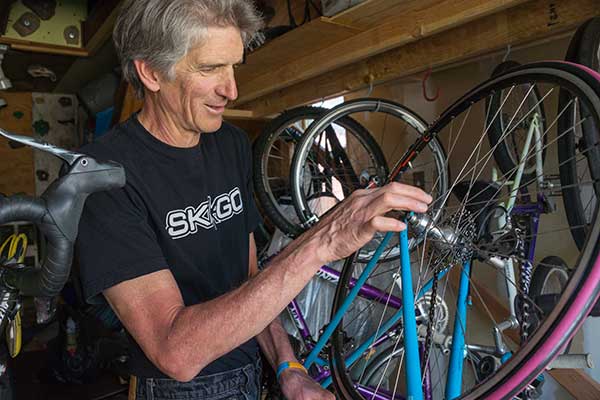 Zinn shows off the details of a bikes he built in the 1980s.

Zinn started down that same path in the early 1970s and attended Colorado College for his bachelor’s degree. He majored in physics and capped it off with a project on the physics of bicycles. Inspired by an article in Physics Today, he used early Fortran computer models to investigate why bikes stay upright.

However, he was not an indoor lab rat. Zinn competed as a cross-country skier before switching to cycling following a leg injury. By the time he graduated, he was on the U.S. Olympic cycling team, competing in races all over the world. "In Los Alamos, it’s kind of accepted you get one year to play around after college, before you go to graduate school," Zinn said.

But he never quite made it back to school. For a time he worked as a petroleum geophysicist but was soon laid off following a downturn in the oil market. Out of a job and living in Mountain View, California, Zinn found himself thumbing through the phonebook and spotted a name that he recognized: Tom Ritchey, one of the world’s master bike builders.

"It’s just like fate or something," Zinn said. "I was like, ‘Whoa, I wonder if that’s the Tom Richey who makes those bikes." It was, and as fortune would have it, one of his employees had just quit that morning. Zinn convinced Ritchey to take him on and teach him the craft.

The late 1970s was an exciting time to be a part of the biking scene in Northern California. There, a tightknit community of bike enthusiasts had been prototyping the world’s first mountain bikes. It was an invention poised to revolutionize the cycling industry, and Tom Ritchey was right at the center of it. "This was all new territory — we were the first ones," Zinn said.

After a few years, Zinn started his own company in Boulder, Colorado in 1982. He looked for untapped niches in the market, and became best known for his custom bikes for tall people.

Zinn, who himself is six-foot six-inches tall, used his background in physics to fix a problem that had been plaguing large bicycles for years. At high speeds, the front ends of big bikes developed a violent wobble. "The shimmy would start and then the oscillation would just build and build and build until you crashed or you figured something else out to slow it down," Zinn said.

He realized that big riders put the bike’s frame under a lot of stress, particularly at high speeds. The complex forces caused small vibrations to grow, eventually hitting a sort of resonance frequency (technically a "Hopf bifurcation") where the bike became totally unstable. Zinn eliminated the problem by making his bike frames torsionally stiffer and smaller, while lengthening the handlebars, seat posts, and cranks to still fit taller riders comfortably.

In 1989, he started writing articles about bicycle technology. A friend of his who edited VeloNews wanted a technical column to balance out the publication’s racing coverage and reached out to Zinn in part because of Zinn’s background in physics. Zinn has been writing his weekly "Technical FAQ" column ever since.

And the column led to his ubiquitous repair manuals. The owner of a bookstore in Boulder was an avid bicyclist and read Zinn’s column. Each time Zinn’s wife visited the shop, the owner would tell her to get Zinn to write a book, and to title it Zinn and the Art of Mountain Bike Maintenance, a riff on the popular philosophy book Zen and the Art of Motorcycle Maintenance by Robert Pirsig.

The book was published in 1996 to immediate success. With clear, concise writing, easy-to-follow cartoon diagrams by illustrator Todd Telander, and a healthy dose of humor, the books taught readers how to do everything from fix flats to build complex wheels.

Since then, it’s been through five editions, and sold more than 160,000 copies. He followed it up with his road bike edition a few years later. They’re popular with both advanced mechanics and beginners just starting to tinker with their machines.

Zinn’s latest book, The Haywire Heart, delves into cardiology in endurance athletes. He developed a heart arrhythmia when he was 55 and realized many of the other athletes of about the same age did too. "Everybody had been a believer that exercise is really healthy and you can’t overdo it," Zinn said. "Well I think there’s very strong evidence to show you can."

Zinn still rides every chance he gets when he’s not building a custom bicycle or penning a new column. "I still find it quite interesting writing and designing and building bikes and bike equipment," Zinn said. "I imagine I’ll keep doing that for a while."

The author is editor of The Antarctic Sun (part of the U.S. Antarctic Program and funded by the National Science Foundation), and is an avid mountain biker.