Expanding the Fourth State of Matter

2017 APS Division of Atomic, Molecular, and Optical Physics Meeting — A typical phase diagram paints a picture of three states of matter: solid, liquid, and gas. But what about plasma? It’s the most abundant state of matter in the universe, but plasma can’t exist for long under normal terrestrial conditions.

Out in space, exotic plasmas can occur inside white dwarfs, large planets like Jupiter, and the Sun and other large stars. On Earth, researchers are studying fully ionized forms of plasma created under artificial conditions hovering just above absolute zero temperatures. By studying these in the lab, they hope to learn more about some astrophysical plasmas deep in space.

While the mechanism of its formation is known, the first such ultracold plasma was observed in the lab less than two decades ago, which might make this a budding field in physics. A number of recent results were presented at the 2017 DAMOP meeting in Sacramento, California.

Thomas Langin of Rice University was one speaker who has trekked down new paths in the field. As a graduate student, Langin worked with Thomas Killian of Rice University, a long-time researcher in ultracold plasma physics. Killian's work over the years has spanned the first observations of plasma itself and of disorder-induced heating, all the way to present day with more detailed studies of plasma dynamics. 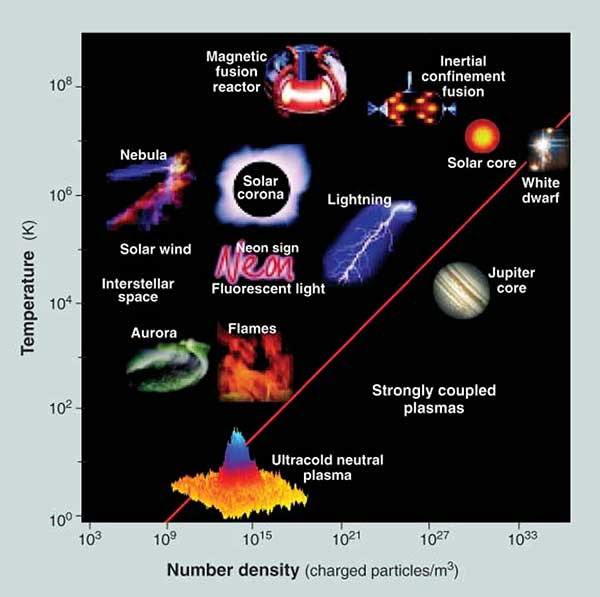 Neutral plasmas in the laboratory and in nature.

The experiment reported at DAMOP focused on the ion temperature evolution in strongly coupled plasmas, and what factors contribute to heating mechanisms during their lifespan. "I’m very excited to present my talk, which is no longer on the progress … but rather the actual laser cooling of an ultracold neutral plasma," he announced during his lecture.

To create these ultracold neutral plasmas, a neutral, cold gas is photoionized to free the atomic electrons. Through a process known as disorder-induced heating, the newly created ions rapidly heat up over nanoseconds, and the system quickly expands, giving the plasma a lifetime on the order of microseconds.

"[The] electrons expand and drag the ions with them, and over 20-30 microseconds, [the plasma] doubles and triples in size," Langin explained. "Even at these relatively high temperatures, you're still in this interesting regime, where the coulomb interactions [of the molecules] are so strong ... With this [experiment], we have a platform for studying systems similar to Jupiter’s core, white dwarfs, and number of other systems in regime of strongly coupled plasmas."

Measuring the coulomb coupling parameter (the ratio of the potential energy between neighboring particles to their kinetic temperature) is a central focus of research in ultracold neutral plasmas. As the coulomb parameter increases above unity, the potential energies between ions starts to dominate thermal motion, and it becomes difficult to distinguish the small thermal motions of ions from the expanding plasma.

"In steady-state plasmas, the temperature is determined by the comparison of heating to cooling rate," Langin continued. "If you can change the cooling rate, you can make the plasma go to a lower temperature." This has been tried with single particles, but so far it's only been discussed theoretically for plasmas.

"We have the ability to cool along all three axes with cross-polarized beams … after 10 nanoseconds, we imaged the expanding cloud," he described. By using laser-induced fluorescence spectroscopy, they were able to see the temperature evolution of an ultracold neutral plasma with laser cooling, which to Langin is "pretty exciting" for the field of ultracold plasmas.

Characterizing the plasma temperature, however, is an equally daunting task. Although there are a few measurements of electron temperatures in ultracold neutral plasmas, they tend to be applicable only at early times in the plasma evolution and have large uncertainties. Duncan Tate of Colby College has sought to tackle this problem, and he has finally scratched the surface of defining a precise range in what are known as Rydberg plasmas. Rydberg atoms are highly excited species where the electron orbitals can be very large.

"I think the last 15 or so years, [physicists] have developed a sense of how Rydberg atoms evolve to plasma, but understanding what the temperature of a sample of ultra-cold Rydberg atoms is … to my knowledge that has not been explored all that much," Tate explained during his DAMOP presentation.

Similar to the way in which temperature was measured in Langin’s research, Tate and his colleagues measured the plasma expansion velocities spectroscopically. "We've done this for a bunch of Rydberg states and densities, and we’ve come up with values for the [electron] temperature of a Rydberg plasma," said Tate. "The smaller distance [between atoms], the hotter the plasma." This relationship turned out to be a universal curve, in which the binding energies of different Rydberg states could be plotted as a function of Rydberg atom density.

"Once you have a critical density of ions so the electrons cannot escape, [the plasma] reaches what is called the ‘avalanche regime’," Tate described. In this avalanche, the plasma quickly becomes fully ionized. "Our understanding right now is that the end of the avalanche process is what determines the subsequent electron temperature of the plasma, and the plasma will expand as if it had no [un-ionized] atoms at all."

Plasma temperature is only one of the basic characteristics needed to understand this state of matter, and new tools in atomic physics shouldl expand the ability of researchers to test the parameters of plasma under more extreme conditions. Tinkering with the densities, cooling rates, and charges of this odd state of matter could expand the understanding of plasmas in the lab — and much of the universe around us.