Wouldn’t it be groovy if flowers were symbols of peace, love — and electronics? The idea of electronic plants, or e-plants, has germinated before, but to no avail: electronic circuits were unable to integrate organically into the plant using its natural structure. Researchers may now have found a solution, literally. As Stavrinidou et al. report in the Proceedings of the National Academy of Sciences (DOI: 10.1073/pnas.1616456114), they synthesized a water-soluble polymer solution that successfully transports electronic material throughout a plant, providing an opportunity for harnessing the power of plants in the future. Borrowing a trick from the way a plant soaks up water, the researchers placed a freshly cut rose in the solution for 24 hours. The small molecular size of the polymers (called oligomers) allowed the plant to completely transport the particles throughout its vascular system, including into the spongy "skin" area of the leaves known as the apoplast. The oligomers, which are ordered in a wire-like path within the plant’s veins, were then tested for their electrical properties. The team concluded that the polymerized solution could retain a high conductivity over the extended length of the stem, mimicking an electrical circuit within the plant. The team hopes their solution can flower into a new electronic circuitry within plants for "power plant" technology.

The Mysterious Magnetism of White Dwarfs

The compact corpses of certain stars, called white dwarfs, are known to be the evolutionary endpoint for many luminous celestial bodies. But astronomers have yet to uncover the reason for their magnetic fields. One research team decided to investigate — and related it to our Jovian neighbor. Isern et al., writing in Astrophysical Journal Letters (DOI: 10.3847/2041-8213/aa5eae), analyzed and compared the convective motion in white dwarfs to the same process that generates intense magnetic fields on the surface of Jupiter, known as a dynamo. As white dwarfs evolve and cool to lower temperatures, they end up with two main constituent elements, carbon and oxygen, which crystallize to form a carbon-rich mantle on top of a solid core of denser oxygen. The team calculated the properties of white dwarfs within 65 light years from the sun, and they found that the stars with high magnetic fields would have more convective activity within the carbon mantle, leading to higher dynamo energy. While their calculations only sample single white dwarfs, the team has made progress in ruling out other long-standing hypotheses, such as binary mergers or amplification of progenitor magnetic fields. 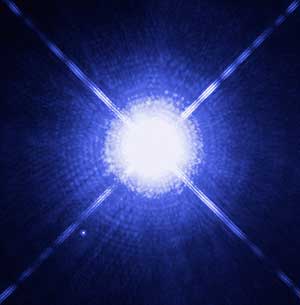 Gluons Give Protons a Spin

The case of the proton’s missing spin has come closer to being resolved, as theoretical computations find that force-carrying particles called gluons provide about half of the proton’s spin. Originally, physicists assumed that the intrinsic spin angular momentum of the proton — which is equal to ½ in units of Planck’s constant — was the result of adding together the spins of the three quarks that make up the proton. However, experiments in the 1980s revealed that quark spins only accounted for about 30% of the proton spin. The rest could come from gluons, which are massless particles that bind quarks and other nuclear material together. Using a model in which quarks and gluons reside within a 3D lattice, the χQCD Collaboration calculated how much gluons — which are spin-1 particles — align with each other inside the proton. The results, reported in Physical Review Letters (DOI: 10.1103/PhysRevLett.118.102001), showed that the net spin contribution from gluons is about 50%, which is roughly consistent with recent experiments. The remaining 20% of the proton spin is thought to be due to the orbital angular momentum of quarks and gluons as they move around inside the proton. (For more, see the Viewpoint in Physics "Spinning Gluons in the Proton" by Steven Bass) 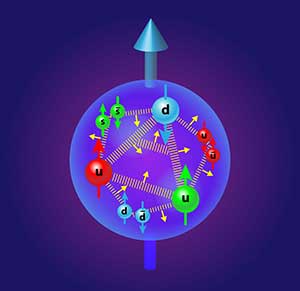 Two independent research groups say that they have observed signatures of supersolidity in superfluid Bose-Einstein condensates (BECs). Supersolidity — alongside superconductivity and superfluidity — is a spectacular macroscopic quantum state of matter, in which a crystalline substance can flow like a liquid with zero viscosity. Starting in 2004, several groups claimed to have found evidence of supersolidity in pressurized, ultracold helium. In 2012, however, more sophisticated studies dampened the excitement, revealing that the early data were misunderstood and leaving supersolidity in the realm of conjecture. Now, Leonard et al. and Li et al. report in Nature (DOI: 10.1038/nature21067; DOI: 10.1038/nature21431) that they have seen the evidence of supersolid behavior in quantum gases cooled to nanokelvin temperatures. Leonard et al. placed a BEC inside crossed optical cavities, in which laser light caused the atoms in the condensate to crystallize and form a solid that retained the superfluidity of the condensate — a supersolid. Li et al. instead trapped a BEC in a double-well potential and "shook" it with lasers. This coaxed the atoms to arrange into a periodic striped pattern, which the authors interpret as solid order coexisting with the superfluid one. 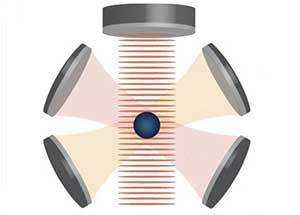 Understanding how impurities interact with a quantum environment is a formidable theoretical challenge but, as Lemeshko reports in Physical Review Letters (DOI: 10.1103/PhysRevLett.118.095301), there is a simple and elegant way to describe an important type of impurity: a molecule immersed in a quantum solvent. Analyzing experimental data, Lemeshko has shown that molecules in one such solvent, superfluid helium, form quasiparticles called angulons. A superfluid environment can strongly affect a molecule’s rotation, thereby shifting its spectral lines, and to understand this, researchers have had to run complex numerical simulations limited to small clusters. Inspired by the quasiparticle concept of polarons — electrons with renormalized properties moving in materials — Lemeshko wondered if a similar quasiparticle approach could simplify the problem of rotating polyatomic molecules interacting with quantum solvents. Lemeshko has now demonstrated, through a comparison of theoretical predictions and experimental results, that angulons are especially helpful in understanding the rotational structure in the absorption spectrum of molecules immersed in quantum solvents. With simple analytical expressions available, analyzing experimental data will be much simpler. This may also help researchers use molecules immersed in quantum solvents as remarkably small sensors that are only a few atoms in size. (For more, see the Viewpoint in Physics "A New Angle on Quantum Impurities" by Yulia Shchadilova) 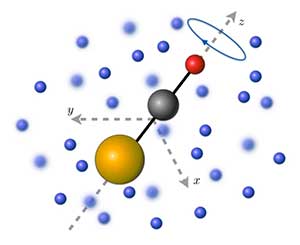