Physicists long believed that the structures of all crystals consisted of patterns that repeated over and over again. But that all changed in 1982, when Dan Shechtman of the Technion Institute in Israel was on sabbatical at the National Bureau of Standards (NBS, which later became NIST). He looked through his microscope and saw something he thought could not exist — crystal structures that are mathematically regular but do not repeat themselves.

Shechtman had discovered quasicrystals. Today, they are in a variety of applications including steel armor and non-stick frying pans. But back in the 1980s, his work shook up the world of chemistry. Although his discovery was first shunned by certain scientists, including his team leader at NBS and Linus Pauling, it started a new era of crystallography and garnered him the Nobel Prize in 2011.

Alaina G. Levine had the chance to sit down with Shechtman while at last year’s Lindau Nobel Laureates Meeting to discuss his advice for success in science and how to deal with rejection. This interview has been edited for space and clarity.

DS: My grandfather brought to me the first facts of science and he explained to me how things work. He also bought me a very important present that later shaped my life — a magnifying glass. I was 7 years old, just starting school. I was walking with this magnifying glass looking at insects and flowers and everything small, and I fell in love with the world of small things. This was the start.

When I was 10 years old, [one of my teachers] said to the class "we have a microscope in school", and I jumped and asked "can you bring it to class?" and I kept asking him. Finally after several weeks of asking, he brought it to class and he said "Dan, You’re the most interested here, why don’t you come to the microscope and look at it." I came to the bench and looked at the microscope and I could not leave the microscope. It was amazing, amazing! So the teacher said "sit down and let others try" and I said "wait, wait! noooo!!"

In 1966 or 67, while I was doing my master’s degree at the Technion, they bought the first transmission electron microscope. I sat by the technician who assembled the microscope, day and night. He was Japanese. He spoke [no] English. So I learned the mechanics of the machine, how to use the machine properly. I studied the theory and practice. I became an expert in transmission electron microscopy. What is an expert? Somebody who can teach. I taught many classes in this.

AGL: You were 41 when you made your discovery. Tell me about what led up to that moment.

DS: On April 8, 1982, I looked in the microscope, about half a year after I arrived at NBS for my sabbatical and I said, "hmm, that’s interesting". You know how Archimedes shouted Eureka? You don’t do that anymore. Today when you make a discovery, usually the first mention is, "hmm, that’s interesting" or "hey! What’s going on here? This may be a discovery." At that moment, I said here is the phase and let’s see what the diffraction pattern is, and I said "ein chaia kazo", which is Hebrew for "there ain’t no such animal!". So I looked again and said I must show this to someone. I walked out of the room and I looked left and right. There was nobody. So I went back to the microscope. I continued until the evening to try to find out what I had. Immediately my thought was that this is a twin structure. I spent all afternoon looking for the twins with every method that was available, but couldn’t find it. So I knew it was something. But what was it? I knew what it was not a twinned structure.

The first person who was willing to work with me brought up the notion of a new structure. He was Ilan Blech who was a professor at the Technion. He proposed a model to show how such materials could have been created. It’s called the Blech Model. It’s a physical model of icosahedra joining in space. Together with him we sent a paper for publication to the Journal of Applied Physics. It was rejected right away. The editor didn’t even send it for review.

So I sent the paper to the Journal of Metallurgical Transactions, which published it 8 months later in June 1985. In the meantime, I showed the rejected paper to John Cahn, who was my host at NBS. I asked him why was it rejected. He read it, and said "Danny we have something fantastic here. Let’s do something completely different. Let’s write another paper, a short one and send it to PRL." We did and it was accepted and published in November 1984. So the second paper was published first. Ilan Blech and Denis Gratias, a mathematical crystallographer from France were also with us on the paper.

When this was published in 1984, hell broke loose all over the world. I was getting emails, telephone calls, letters. In the paper I explained how to make the material. This was a fast growing community of brilliant young scientists who took my discovery and turned it into a thriving science. They found many, many new alloys, including stable ones. They studied their properties. Uh! We had such fun in those days. We were a close community. Everybody knew everybody.

AGL: So basically there was the moment in 1982 and the moment when the paper came out. What happened in between?

DS: In the end of 1983, I left NBS to go back to Israel, and I started to talk about my 10-fold diffraction patterns and something new in crystallography. And people said this is nonsense. So the reaction varied, between the reaction of my host, John Cahn, who was positive, and said "Danny this material is telling us something and I challenge you to find out what it is". He encouraged me to continue studying it. The other side, the worst reaction, was from my group leader who came to my office one day, smiling sheepishly and put a book on my desk on x-ray crystallography. He told me to "read this book and you’ll understand what you’re talking about". I said "I don’t need to read the book. I’m a professor at the Technion. My material is not in the book". A few days later, the group leader said to me "you are a disgrace. I want you to leave. I cannot have my name associated with you." So I had to leave my group but I found another researcher there who was willing to adopt a scientific orphan- me.

AGL: What motivated this behavior?

DS: This was a shocking discovery. We had 70 years of established crystallography without any exception to periodicity. Hundreds of thousands of phases were studied. The science of crystallography was considered a mature science.

AGL: What advice do you offer young scientists about dealing with rejection?

DS: I have several [pieces of advice]. Number one, become an expert in something you like. Try to be the best in something you like. Once you are an expert and someone criticizes you, then you can say "you may be the greatest scientist in the world but I am an expert in this". Number two, pay attention to details, especially surprising details that you don’t expect. And if you find something strange, don’t let it disappear. Study and find out what it is. Sometimes it will be an artifact, but in some cases, you’ve made a great discovery that will determine your success in science and your career. So be like a Rottweiler: bite and don’t let go! And if somebody says this is rubbish, say "don’t tell me it’s not in the book. Show me what’s wrong". Check yourself ten times before you start talking. Make sure you don’t make a mistake. But as an expert, trust yourself.

AGL: Can you tell me about your experience with the late Linus Pauling?

DS: Pauling was arguably the greatest chemist of the 20th century. He was a brilliant scientist. But he lacked one thing — he was not modest. He thought he understood everything. When he started to argue with me and also my followers, he entered my territory without being an expert in electron microscopy. He tried to find faults in our models.

AGL: What advice would you offer a young scientist coming to a conference, to go up to a leader in the field?

DS: One piece of advice: Develop your social skills. Social skills are as important as intellectual skills for succeeding in life.

AGL: When did you first realize that, and was that an evolution that you began to realize it over the course of time?

DS: I am married to a woman who is also in academia — she is in psychology. We discuss these things endlessly. Over time, I realized that I’m not the best person with social skills. I’ll tell you what my limitation is — I will not easily approach somebody because I want to talk to him or her. If there is person I want to talk to and he or she is surrounded by others [like at a mixer], I will not push myself in to the circle. I see it as a limitation — I try to teach other people to do that, but I personally am a little bit shy of doing that. However, when I need people, then my social skills show up.

AGL: I wouldn’t have guessed this about you.

DS: You see when you talk to me, you see my eyes. Many people when they talk to you, they don’t look at you. They look sideways, they preach to the wall. they talk to the wall, they talk to the sky. When I talk to someone, I always look at their eyes. That is a small part of social interactions. Another thing is that I listen. You tell me something, I try to remember things, to know who you are. 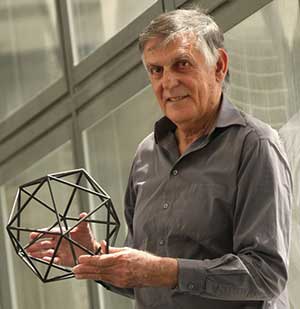 Dan Shechtman and the Blech model