Each year, APS News selects the top ten physics stories that made it into newspapers and onto televisions in the U.S. and across the world. While the selections may be scientifically important, the main criterion is how much coverage they generated.

It was the black hole merger heard around the world. In February 2016, researchers announced the first direct observation of gravitational waves. The Laser Interferometer Gravitational Observatory Scientific Collaboration (LIGO) and the Virgo Collaboration attributed the signal to a merger of two black holes, whose death spiral could be heard as a "chirp" when converted to an audio waveform. Then in June 2016, the research teams presented results from a second merger, this time of two black holes with smaller masses. The LIGO detectors were shut down for upgrades and restarted in November for a second observing run. Also in June, the European Space Agency had a successful test run of the Laser Interferometer Space Antenna Pathfinder mission, showing the feasibility of operating gravitational wave detectors in orbit. 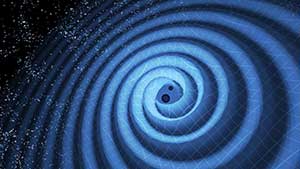 In the early 1970s and 1980s, they explained phenomena in quantum states of matter, such as the quantum Hall effect and superfluid phase transitions. The Nobel Prize in Chemistry was awarded to Jean-Pierre Sauvage, J. Fraser Stoddart, and Bernard L. Feringa for their work in designing and synthesizing molecular machines. In awarding the prize for these advances in nanotechnology, the Nobel committee singled out Richard Feynman’s 1959 after-dinner speech "There’s Plenty of Room at the Bottom."

In 2015, researchers at the LHC at CERN saw an unexpected excess of so-called diphoton events at an energy of 750 GeV, raising hopes of a crack in the standard model and chances for new physics. Normally, such a bump in the night would be subjected to intense statistical scrutiny, but the fact that two independent LHC teams — ATLAS and CMS — observed the same excess raised hopes even further. Particle theorists got to work, generating hundreds of research papers explaining what the anomaly might be. A favored explanation was a new particle, the digamma, which decayed into pairs of photons. Alas, analysis in August 2016 of more data taken by both teams showed no bump, suggesting that the 2015 excess was a statistical fluke.

Welcome to the table

In 2016, researchers reported using neutrons to make holograms based on the same principles used in optical holography. A neutron enters an interferometer and is separated into two paths by a beam splitter, generating reference and object beams. The object beam was given a spatially varying phase after passing through a test object called a spiral-phase plate (a device that imparts helicity), while the reference beam, as in optical holography, is unaltered. The two beams were combined at another beam splitter, and the resulting beams sent to an imaging detector. The unique setup may offer a new way to study neutrons and use neutron imaging for characterizing properties of materials.

Just when we thought the controversy over Pluto’s status was past, researchers announced that a 9th planet may exist, and it might be throwing things in the solar system off balance. According to the calculations of Konstantin Batygin and Mike Brown at Caltech, Planet 9 appears to orbit at about 30 degrees off from other planets’ orbital planes, and would travel almost 93 billion miles from the sun. It may have evaded detection owing to its faraway orbital path, but its mass (about 10 times that of Earth) seems to have created some perturbations in the observations. Batygin and Brown announced their results during the joint meeting of the American Astronomical Society’s Division of Planetary Sciences and the European Planetary Science Congress in October 2016.

"Prisoner of conscience" Omid Kokabee was released on parole from Iran’s Evin prison at the end of August after serving only half of his original sentence. Kokabee, who was convicted of "communicating with a hostile government," was initially sentenced to 10 years at Evin. Kokabee wrote to his family from Evin prison saying that he was jailed for repeatedly refusing to agree to Iranian government requests to work on military research. The first-year physics doctoral student at the University of Texas at Austin received support from the scientific community since his imprisonment, but he then developed cancer while incarcerated. He was granted medical furlough to recover from surgery to remove his cancerous kidney.

One of the scientists who took a leading role in the Higgs boson discovery of 2012, Fabiola Gianotti is now in charge at the European Council for Nuclear Research (CERN) as the lab’s 15th director-general and the first woman in that position. Gianotti received her Ph.D. in experimental particle physics from the University of Milan in 1989 and officially became director-general in January 2016. She says that one of her top priorities is to continue to collect high-quality data during LHC’s Run II, which began in 2015 and is achieving collision energies of 13 TeV. And in 2016 she has signed on new associate members Cyprus, India, Slovenia, and Ukraine, and welcomed Romania as a new member state.

After 10 years from launch to final landing, the Rosetta probe from the European Space Agency (ESA) made contact with its target — Comet 67P — on September 30, 2016. As the first probe to orbit around a comet and release a lander (named Philae) to the rock’s surface, Rosetta’s historical mission captured over 80,000 images, revealing big grains of water ice on the comet’s surface, molecular oxygen in its coma, and diverse landscapes. Rosetta’s pictures a month before its landing uncovered Philae’s location, much to the relief of the navigation crew. Rosetta’s sidekick had crashed on Comet 67P, and tumbled into a dark crevice, where it lost contact.