Bemused by the Blue Whirl

2016 APS Division of Fluid Dynamics Meeting — It all started with 800,000 gallons of bourbon and a lightning strike.

Elaine Oran and her colleagues at the University of Maryland were intrigued by video footage that surfaced of a Jim Beam warehouse that caught fire in a lightning storm. But the fire and alcohol spread to a nearby retention pond, creating a booze-fueled "fire tornado" over water.

"We spent the whole time looking at this fire whirl," Oran exclaimed during her presentation at the 2016 APS Division of Fluid Dynamics Meeting. "We looked at each other and [asked], ‘Why can’t we use fire whirls to clean up oil spills?’"

Currently the Glenn L. Martin Institute Professor of Engineering at Maryland, Oran has done extensive research with reactive flows throughout her career.

"[My team and I] knew the combustion of these fire whirls was very efficient, but things changed when we saw this video," continued Oran. "We wanted to know if it was possible to use these for something beneficial instead of letting them be the nightmare of firefighters and people that live in the bush."

Fire whirls are a special kind of reactive flow that has been seen before over land, but investigating them in the lab requires a closer look on a smaller scale. With help from Michael Gollner, Sriram Hariharan, Huahua Xiao, and Ajay Singh, Oran used a high-speed camera to film the flame within two offset half-cylinders over a shallow pan of water. This offset setup is commonly used to create fire whirls in a laboratory, with vertical openings that allow air to flow inward towards the flame region. A small copper tube under the water pumped the heptane fuel to the center region of the water surface.

A fire whirl starts when hot flammable gas diffuses into the surrounding air and combusts, producing a turbulent flame above a pool of fuel. As Oran and her team began observing increased combustion within their setup, the unthinkable happened: "The fire whirl started to intensify, as it pulled in more and more air," explains Oran. "And then … what [appeared] is this little blue flame. You can hear my colleagues [Huahua and Ajay] saying ‘Oh my god, what is that?!’"

This tiny hydrocarbon flame, named the "blue whirl" by Oran’s team, is a new state of fire combustion. Since they released information about their discovery, it has been picked up by media worldwide, and countless videos show the mysterious blue flame swirling on the water’s surface. Oran describes it as a "beautiful" equilibrium between the airflow in the chamber and the evaporation of the fuel from the surface. "[The whirl] does it naturally … but we don’t know how it all fits together," Oran tells APS News. "Pretty weird, huh?"

Although the bigger picture is still hazy, her team has been hard at work to figure out the fluid dynamics, thermal properties, and chemical kinetics of the blue whirl. Their understanding, based purely on fluid dynamics, suggests that the blue whirl forms from transitions called "vortex breakdown." As a fundamental concept in swirl combustion, vortex breakdown describes the drastic change of vortex structure, first spiraling outward and intensifying in speed to eventually "bubble out" and stabilize as a lower-turbulence structure.

So far, they’ve published their findings on the physical structure of the blue whirl, and have completed experimental testing of the temperature structure using thermocouples and hot-wire pyrometry. Their 2D thermal map, obtained from multiple images, confirms a temperature of 2000 K in the center of the blue whirl. They’ve also identified the whirl to be stable and soot-free burning, meaning that there is an abundance of oxygen to completely burn away the fuel from the water’s surface.

"We [also] don’t know how to make the blue whirl without the larger fire whirl first," adds Oran. "Is there a way to bypass that step? I’m not sure there is, but we won’t know until we get a computer simulation … and we aren’t likely to find this out by accident!" 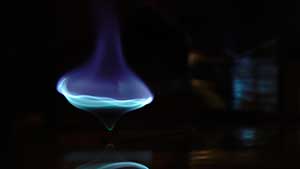 Researchers at the University of Maryland are studying fire whirls as a potential method for remediating fuel spills.