The Physics of Skateboarding: Making Science Relevant, Engaging, and Motivational

Although I am a professor at the University of Texas at El Paso, I’m also known as Dr. Skateboard. People often ask, "Why are you Dr. Skateboard?" or "What’s up with the Dr. Skateboard thing?" So let me give you the backstory.

I’ll begin with the skateboard. I have been a skateboarder now for almost 40 years. I started skateboarding when I was thirteen years old, because it was something fun to do with my friends. When I was in middle school in Richmond, Virginia, I also decided that I wanted to be a professional skateboarder. As I progressed in the sport I competed as an amateur, and this allowed me to travel up and down the East Coast and even out to California.

In the 1980s, I made my living as a professional skateboarder through endorsements and prize money while participating in contests and demonstrations, as well as traveling around the U.S. and abroad. In the late 1990s and early 2000s, I did shows at many interesting venues, including state fairs, skateparks, and music festivals. Today, I continue to do demonstrations, mostly in schools. I am a skateboarder. It is part of who I am.

But what about the "Dr."? You might think that since I have been skateboarding for so long, it would make me a doctor. Well it goes a little further than that. When I was in middle school, I set some goals to try and achieve success in my education as well as my sport. Really, no one in my circle had a doctorate. One skateboarding buddy said, "Dude, I don’t know anyone with a Ph.D." I had a dream of going to college, and that dream took me all the way to getting a Ph.D., something I never thought would happen. My persona as Dr. Skateboard became a path for me to connect with students about setting high goals in all that they do. It is a way of bringing together high achievement in your education and in what you enjoy.

For me, skateboarding became the vehicle that led to my success in education. In fact, the skills I learned in skateboarding, such as practice, creativity, discipline, persistence, and setting goals, later made me successful in school. Young people can in effect learn more when they can see practical applications in their own lives. My inspiration for choosing skateboarding to teach physics came from my work with middle school students who were not interested in the topics of science class until I showed how much of physics, such as forces and motion, were found in things they did regularly — such as skateboarding. So, this idea that there was a lot of physics in skateboarding led me to coin the phrase Action Science. It has the action of action sports, and has the science of motion, forces, and simple machines.

Often, students will ask their teacher, "What is the point of this?" or "Why are we doing this anyway?" They want to know exactly how the material they're learning in class will apply to their everyday lives because, at times, it seems disconnected from what they do. Physical science concepts are often taught quite traditionally in school, and in an almost clinical manner, isolated to a specific circumstance within a classroom. This is what disconnects the tools and the content from the students' experiences. There is a real need for educators to explore and connect content in settings that are both authentic and relatable for students.

Where does learning occur? Learning takes place when you go to areas of high risk and high ambiguity. When you are learning something, there is usually something you are laying on the line, and that is where real learning occurs. I see education as less about what you know, and more about what you can master. Because if you can master one thing, you can probably master something else. In skateboarding, you have to master the Ollie, which is a skater's technique for flying through the air. The Ollie showcases the principles of flight by demonstrating that you have to overcome gravity, and counter friction (or drag) with thrust. When students understand the physics, they're not just skateboarders. They become scientists riding around in a field laboratory, engaging in concepts in motion, forces and simple machines. A skateboarder in a skatepark is actively analyzing, synthesizing, and evaluating the environment, while making small adjustments built around trial and error.

The skateboard itself has a number of simple machines that make it functional and fun. Modern decks (the board you stand on) have an upturned nose and tail. Each end of the deck can act as a lever for the rider, and help a skateboarder to lessen the force exerted while performing tricks on ramps, in the street or on flat ground. Additionally, the trucks (the structures that attach the wheel assemblies to the deck) on a skateboard deck are fulcrums, and they allow the rider to control the movement of a trick by applying or releasing force on the nose or tail. Another simple machine on the skateboard is the wheel and axle, consisting of the urethane wheels with sealed bearings and the axle that extends through the truck. On a skateboard, the wheels and axles help the rider to perform standard moves like rolling, spinning, grinding, and carving. By definition, the skateboard is a compound machine, as it has more than one simple machine.

So, I put it all together and called it Dr. Skateboard’s Action Science, which is a curriculum supplement that teaches physics in a fun way that integrates skateboarding and BMX (a kind of stunt bicycle technique). It has also been used to engage students all over the U.S., in Canada, Mexico, and into South America. I also wrote a book for teachers entitled Action Science: Relevant Teaching and Active Learning that integrates teaching methods, video, and hands-on activities within an approach that focuses on immersing students in experiences and then providing content. Action Science is the use of familiar objects, materials, and experiences to teach concepts in STEM.

On my website, I integrated Facebook, Twitter, Instagram, and YouTube in order to communicate to students in a variety of media. Action Science is all about making concepts in STEM real to students and making things relevant and in context. We shot a lot of video, we have tried to make it educational, and the program continues to grow. Today, on my YouTube channel, I have over 70 videos that present educational content in engaging formats.

Connecting with students and teachers through live action speaks to my roots and allows me to do interesting things in the community. Recently, we developed "Skatepark Mathematics" to present concepts in algebra and geometry; students collected data, using the athletes as the projectiles in experiments. We also have done large arena presentations to over 8000 local middle school students, to present STEM concepts in innovative ways. We wanted students to see themselves on a university campus, and that college is a place where learning is cool.

But you might ask, what keeps me motivated? Why is Dr. Skateboard’s Action Science my passion today? I’m trying to reach out to the kid who’s maybe not that interested in school, maybe a bit marginalized, and find pathways for those people to learning. It is about helping skateboarders to see themselves as scientists. It’s about mentoring young people in order to help them succeed, and to make college part of that plan. It’s about helping boys and girls to set goals and to achieve them in STEM. It’s about everyone working together in our communities so that your zip code doesn’t have to be your final destination. I believe if we can tap into what kids like to do and help them to make connections to their learning, and we can carefully and caringly guide them through this process, they can really achieve success. It’s about inspiring others to use their gifts to achieve success and to help one another.

William H. Robertson is a professor in the Teacher Education Department in the College of Education at the University of Texas, El Paso. His academic areas of expertise are in science education, curriculum development, and technology integration in the K-12 levels. A long-time participant and performer in skateboarding with over 40 years in the sport, Dr. Robertson has developed Dr. Skateboard’s Action Science, which addresses physical science concepts for middle school students utilizing skateboarding and bicycle motocross (BMX). He is the author of Action Science: Relevant Teaching and Active Learning. 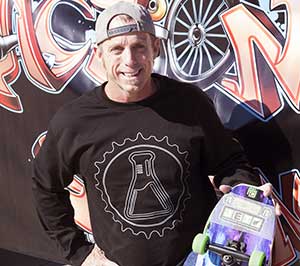 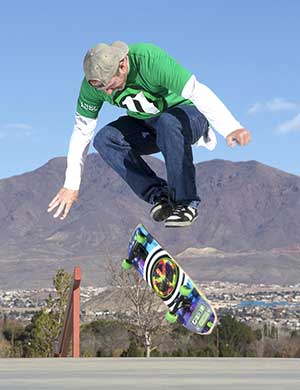 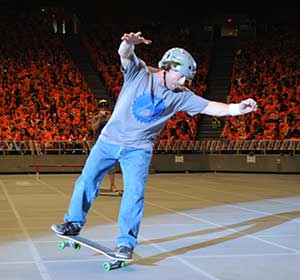