Bringing Home the Gold From Zurich 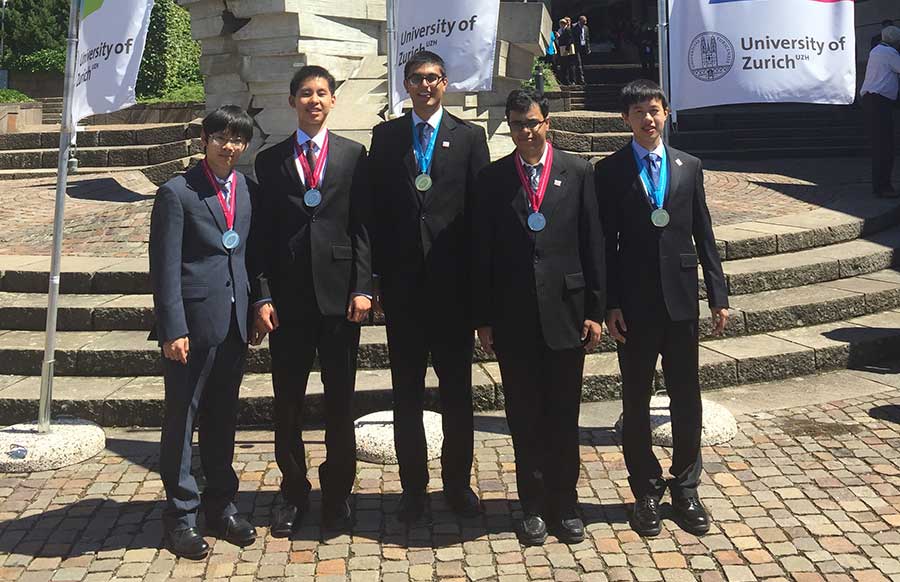 In a weeklong competition in Switzerland and Liechtenstein, the traveling U.S. physics team placed high in the rankings of the 47th International Physics Olympiad, earning two gold and three silver medals. China, Taiwan, and Korea each had five golds; Russia, four; India and Japan, three each. Vietnam, Thailand, Singapore, Romania, and the U.S. each earned two golds. The U.S. tied for 7th place overall in the medal counts. (The cumulative scores ranked teams and individuals by medals, including honorable mentions.)

During the international competition, students are given both experimental and theoretical challenges. Hosted at the University of Zürich, the location offered inspiration to the five young U.S. physicists — in 1905, Albert Einstein was awarded his Ph.D. from Zürich.

“The three theory questions were on mechanics, nonlinear circuits, and subatomic particle detection,” wrote Paul Stanley of Beloit College, the U.S. team’s academic director, in an email. “The uniqueness of the mechanics question was that it was a dialogue between two students about if it was possible to distinguish earth gravity from a space station’s artificial gravity. The nonlinear circuit was based on the thyristor, and was possibly the hardest ‘easy’ question on the exam. The particle physics question was clearly in homage to CERN.”

Added Stanley, “The two experimental questions dealt with a four-point resistance measurement of thin films and bifurcation behavior of [vibrationally] excited poppy seeds. As the poppy seed problem, with spontaneous seed sorting at some excitation ranges, produced unexpected results for most students, it might have been the most entertaining and counterintuitive experiment in years.”

While the exams ramped up their adrenalin levels, the 400 competitors were immersed in a great cultural and professional excursion, connecting with students representing 87 countries. The Department of Physics at the University of Zürich, the Office of Education of Liechtenstein, and the Associations of Swiss Scientific Olympiads recruited hundreds of volunteers to help organize an array of activities and facility tours to spark interest in the budding physicists.

“The midterm party was a highlight for all,” wrote Stanley. “After the exams, [we were] called to attention by a trio of alpine horns … . We could play the alpine horn ([with a] prize to whoever could hold the note the longest) … . We could milk cows (fake cows, but realistic milking seats), toss chickens with slingshots (a fake chicken, but evidently a real sport, where you catch it in a frying pan), hammer nails (2 hits was record to sink it), shoot arrows, and cut logs with a two-person-long saw."

The U.S. team is organized and trained by the American Association of Physics Teachers, with sponsorship from a number of entities, including APS and the American Institute of Physics.

The final results are posted on the official IPhO website.

View the official IPhO 2016 Theory and Experimental Exams with translations.