This Month in Physics History:

February 1968: The Discovery of Pulsars Announced

In 1967, when Jocelyn Bell, then a graduate student in astronomy, noticed a strange “bit of scruff” in the data coming from her radio telescope, she and her advisor Anthony Hewish initially thought they might have detected a signal from an extraterrestrial civilization. It turned out not be aliens, but it was still quite exciting: they had discovered the first pulsar. They announced their discovery in February 1968.

Bell, who was born in Ireland in 1943, was inspired by her high school physics teacher to study science, and went to Cambridge to pursue her Ph.D. in astronomy. Bell’s project, with advisor Anthony Hewish, involved using a new technique, interplanetary scintillation, to observe quasars. Because quasars scintillate more than other objects, Hewish thought the technique would be a good way to study them, and he designed a radio telescope to do so.

Working at the Mullard Radio Astronomy Observatory, near Cambridge, starting in 1965 Bell spent about two years building the new telescope, with the help of several other students. Together they hammered over 1000 posts, strung over 2000 dipole antennas between them, and connected it all up with 120 miles of wire and cable. The finished telescope covered an area of about four and a half acres.

Within a few weeks Bell noticed something odd in the data, what she called a bit of “scruff.” The signal didn’t look quite like a scintillating source or like manmade interference. She soon realized it was a regular signal, consistently coming from the same patch of sky.

No known natural sources would produce such a signal. Bell and Hewish began to rule out various sources of human interference, including other radio astronomers, radar reflected off the moon, television signals, orbiting satellites, and even possible effects from a large corrugated metal building near the telescope. None of those could explain the strange signal.

The signal, a series of sharp pulses that came every 1.3 seconds, seemed too fast to be coming from anything like a star. Bell and Hewish jokingly called the new source LGM-1, for “Little Green Men.” (It was later renamed.)

But soon they managed to rule out extraterrestrial life as the source of the signal, when Bell noticed another similar signal, this time a series of pulses arriving 1.2 seconds apart, coming from an entirely different area of the sky. It seemed quite unlikely that two separate groups of aliens were trying to communicate with them at the same time, from completely different locations. Over Christmas 1967, Bell noticed two more such bits of scruff, bringing the total to four.

By the end of January, Bell and Hewish submitted a paper to Nature describing the first pulsar. In February, a few days before the paper was published, Hewish gave a seminar in Cambridge to announce the discovery, though they still had not determined the nature of the source.

The announcement caused quite a stir. The press jumped on the story–the possible finding of extraterrestrial life was too hard to resist. They became even more excited when they learned that a woman was involved in the discovery. Bell later recalled the media attention in a speech about the discovery: “I had my photograph taken standing on a bank, sitting on a bank, standing on a bank examining bogus records, sitting on a bank examining bogus records. Meanwhile the journalists were asking relevant questions like was I taller than or not quite as tall as Princess Margaret, and how many boyfriends did I have at a time?”

Other astronomers were also energized by the finding, and joined in a race to discover more pulsars and to figure out what these strange sources were. By the end of 1968, dozens of pulsars had been detected. Soon Thomas Gold showed that pulsars are actually rapidly rotating neutron stars. Neutron stars were predicted in 1933, but not detected until the discovery of pulsars. These extremely dense stars, which form from the collapsed remnants of massive stars after a supernova, have strong magnetic fields that are not aligned with the star’s rotation axis. The strong field and rapid rotation produces a beam of radiation that sweeps around as the star spins. On Earth, we see this as a series of pulses as the neutron star rotates, like a beam of light from a lighthouse.

After discovering the first pulsars, Jocelyn Bell finished her analysis of radio sources, completed her PhD, got married and changed her name to Burnell. She left radio astronomy for gamma ray astronomy and then x-ray astronomy, though her career was hindered by her husband’s frequent moves and her decision to work part time while raising her son. Anthony Hewish won the Nobel Prize in 1974 for the discovery of the first pulsars. Over 1000 pulsars are now known.

As for little green men, they haven’t been found yet, but projects such as the Search for Extra Terrestrial Intelligence (SETI) are still looking for them. 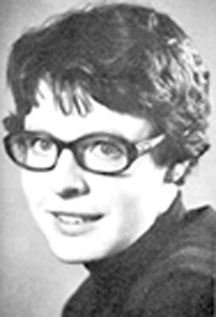 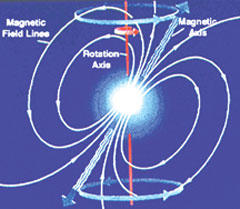 Artist's rendering of a pulsar