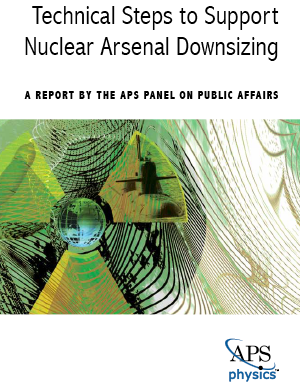 There is a long history of US Presidents working to reduce the role and the spread of nuclear weapons. Most recently, President Obama voiced America’s commitment “to seek a world without nuclear weapons,” while clarifying that “as long as these weapons exist, the United States will maintain a safe, secure and effective arsenal.”

Critical Role of Science and Technology
Science and technology(S&T) will play a critical role in advancing the US plan to balance deterrence with downsizing the U.S. nuclear arsenal. In particular, S&T are essential to enable three key goals associated with this plan:

Steps Toward Verifiable Downsizing and Dismantlement
Consistent with that plan, we recommend the US take the following steps to allow S&T to more fully sustain and support nuclear arsenal downsizing and nonproliferation:

To support the goal of verifiable downsizing and dismantlement:

Taken together, these steps will provide a strong S&T foundation for nuclear arms reduction proposals and nuclear nonproliferation goals.

The American Physical Society was founded in 1899, with a mission of advancing and diffusing the knowledge of physics. APS is now the nation’s leading organization of research physicists with more than 48,000 members in academia, national laboratories, and industry.

This report was overseen by the APS Panel on Public Affairs (POPA). POPA routinely produces reports on timely topics being debated in government so as to inform the debate with the perspectives of physicists working in the relevant issue areas. Indeed, APS has long played an active role in federal government; its members serve in Congress and have held positions such as Science Advisor to the President of the United States, Director of the CIA, Director of the National Science Foundation and Secretary of Energy.