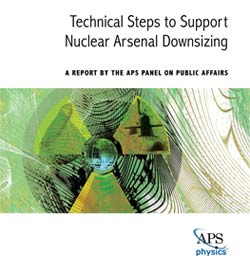 APS has released a report identifying technical steps that will help the U.S. achieve its goals to downsize the nuclear arsenal, prevent the spread of atomic bombs and keep the stockpile safe and secure.

Vice President Joe Biden today outlined those objectives during a speech in Washington, D.C., and the APS report, Technical Steps to Support Nuclear Downsizing, provides concrete steps – including the use of nuclear archaeology to validate nations’ production of atomic material – that will help the nation accomplish its goals.

“There are no technical showstoppers,” said Jay Davis, a lead study participant, founder of the Defense Threat Reduction Agency and former U.N. weapons inspector in Iraq. “The technologies are at hand to substantially reduce the size of nuclear arsenals; no great inventions are required. The good news is we can do it. The bad news is it will take a long time. But, if Congress follows the report’s recommendations, downsizing the nuclear arsenal can be done safely and securely.” Davis outlined the recommendations during a news conference at the annual meeting of the American Association for the Advancement of Science.

As part of its nuclear non-proliferation efforts, the Obama Administration recently began discussions with Russia on a successor agreement to the 1991 Strategic Arms Reduction Treaty – the largest and most complex arms control treaty in history. The Administration is also scheduled next month to provide Congress with an assessment of its nuclear forces and will host 44 nations during a Nuclear Security Summit in April with a goal of keeping nuclear materials out of the hands of terrorists.

Consistent with the President’s vision to support nuclear arsenal downsizing and non-proliferation, the U.S. should take the following steps, according to the APS report:

Taken together, these steps will provide a strong science and technology foundation for nuclear arms reduction proposals and nuclear non-proliferation goals. They will also support numerous treaties, including the Comprehensive Test Ban Treaty and the proposed treaty to ban the production of nuclear materials for weapons.