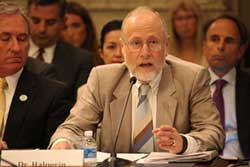 Professor Halperin during his testimony.

“For many scientists, including me, liquid helium is our professional lifeblood,” stated William Halperin, professor of physics at Northwestern University and chair-elect of APS’s Division of Condensed Matter Physics, during his testimony to the House Subcommittee on Energy and Mineral Resources.

The Helium Stewardship Act of 2013 (Act) averted the pending shutdown of the Federal Helium Reserve and allowed the Bureau of Land Management (BLM) to continue to manage its operations until 2021, the new date established for the reserve’s permanent closure. The act also aimed to develop a competitive domestic helium market, but two years after it was signed into law, there are questions surrounding BLM’s implementation and interpretation of the act.

While the hearing was mostly focused on how BLM can improve and expand competition in the domestic helium market, Halperin informed the committee on the importance of liquid helium to the scientific community, the community’s concerns regarding its availability, and steps APS is taking to help academic researchers. Briefly, his testimony highlighted:

Halperin’s testimony can be read in full here.

U.S. Rep. Cynthia Lummis (R-WY) showed particular interest in Halperin’s message, using all of her initial five-minute allotment for questions to follow-up on his testimony. Lummis’ questions enabled Halperin to further discuss the importance of stability in both price and supply of liquid helium for the scientific community.