Skyrocketing prices for liquid helium — an essential resource for our nation’s healthcare technologies and research enterprise — are placing the U.S. innovation ecosystem at significant risk. While scientists are implementing smart business solutions to help stem the crisis, federal action is necessary to save many fields of research.

Liquid helium enables more than 11,000 MRI machines to perform life-saving medical diagnostics in hospitals across the country. But it also enables cutting-edge research that must be carried out at temperatures just above absolute zero (-459.67 degrees Fahrenheit). That ultra-cold environment has generated the breakthroughs behind numerous Nobel Prizes and more than 5,000 U.S. patents.

As co-chairman of a recent report on the helium crisis, I know firsthand just how vital liquid helium is to our nation’s innovation landscape. And our community is paying a heavy price for its lack of ready availability.

Scientists are abandoning entire areas of needed research, and institutions are closing laboratories that rely on liquid helium. We are on the verge of losing vital research, and the nation cannot afford to slow or jeopardize our progress in medical and experimental science.

To help address the liquid helium crisis, scientific societies have become market savvy. Together, they developed a brokerage that helps bring purchasing stability to scientists in remote locations, who are the most vulnerable to price shocks. In partnership with manufacturers, they recently launched a matchmaking website that enables researchers to explore new technologies that can dramatically reduce the amount of helium that they are using.

But these steps aren’t enough, and federal intervention is desperately needed. It wouldn’t be the first time that’s been the case.

In 2013, Congress took action to avert a dramatic helium shortage by passing the Helium Stewardship Act. That important move keeps the Federal Helium Reserve, operated by the Bureau of Land Management (BLM) and currently responsible for approximately 30 percent of the world’s helium supply, open until fall 2021. At present, helium from the reserve is being sold to helium vendors on an in-kind basis, which is discounted from the open-market price and marked for sale to federal end users.

Researchers are already struggling with crippling helium prices, and with the reserve near closing, the situation will only worsen. It is time for the federal government to act again, and the primary action is clear: transition as many of the nation’s technologies that are liquid helium-based as possible to those that decrease helium consumption. Substantially reducing our helium usage — without compromising our nation’s research capabilities — is the key to fixing this crisis.

The reserve provides a resource to enable this transition. Currently, from its sales, it generates more than $430,000 in profit per day. Congress can direct a portion of that money to establish a fund that supports the deployment of technologies that reduce helium consumption nationwide. Projections indicate that if 10 percent of the reserve’s money were redirected to such a fund, it would dramatically reduce the federal government’s own expenditures on helium-based research and thereby pay for itself within seven years.

There are two additional steps that should be taken. First, because helium is vital and nonrenewable, we must carefully steward every drop. The Office of Science and Technology Policy and Office of Management and Budget are in position to ensure this happens by providing guidance to all federal agencies on establishing plans to conserve helium. Agencies’ plans must be adhered to not only in times when helium prices are spiking but also when prices stabilize. Stewardship must become the norm, not an occasional reaction.

Second, the BLM should establish a royalty in-kind program for helium. A portion of the helium extracted from federal lands should be marked as in-kind and sold to helium vendors using current and established pricing methodology. In conversations with Congress, this proposal has received bipartisan support. Congress must now indicate to the BLM to proceed, using the appropriate rule-making.

If these actions are taken expeditiously, we can manage further price spikes and instabilities that jeopardize our medical and research enterprises. American innovation currently runs on helium, and Congress must take the steps to secure a supply of this lifeblood for years to come.

Bare is a distinguished scientist at SLAC National Accelerator Laboratory in Menlo Park, Calif., where he performs research using the Stanford Synchrotron Radiation Lightsource to probe the inner workings of catalysts. Previously, he had a 30-year career in the private sector. 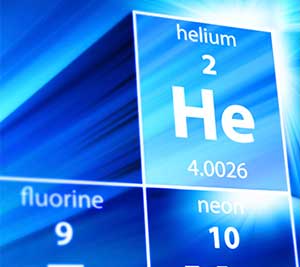