Science and Technology Bear the Brunt of Budget Dysfunction

Once again, the House and Senate are on the verge of recessing at the end of September without passing any appropriations bills for the next fiscal year. And this year, as was the case in 2008 and 2012 — the last two presidential election years — it is likely that Congress won’t take up an omnibus spending package during the lame-duck session. That means the government would run on autopilot under a continuing resolution until March, jeopardizing science as a consequence.

By almost every measure, the federal budget process is badly broken. Spending bills regularly fall victim to gridlock and hyperpartisanship. Continuing resolutions and threats of sequestrations and government shutdowns are accepted as the norm. And authorization bills that once emphasized policy imperatives and visionary considerations are now essentially tools for controlling government spending.

Many discretionary federal functions suffer from the budgetary dysfunction, but none more than science. Unlike a highway project that can be halted and restarted a few months later without enduring consequences, a research facility that closes its doors for a protracted period is likely to lose critical personnel and face significant hurdles and added costs when it tries to reopen.

Cutting-edge science requires long-term planning, sustained and reliable funding, patient capital and judicious acceptance of risk. On each count, Congress is failing to deliver the goods.

The impact of a six-month continuing resolution on the research enterprise isn’t part of the calculus, even though science and technology are the universally acknowledged drivers of the 21st-century economy. The impact is not trivial: Without established budgets for fiscal 2017, federal agencies responsible for supporting the bulk of long-term research in the United States will again follow the ritual of holding back funds until deep into the next calendar year, injecting uncertainty into the work and lives of scientists and students.

Decades ago, such disruptions might have been tolerable. Back then, America was king of the scientific hill. But the U.S. can no longer lay claim to such an enviable status. The rest of the world has caught up, while we have been fighting pitched internal political battles.

You don’t have to delve too deeply to see the injurious impact. In its most recent global innovation standings, for example, the Information Technology and Innovation Foundation ranks the U.S. “just 10th overall, largely because its innovation-supporting policies (such as funding for scientific research) are lower than those of the leaders (on a per capita basis).” And today, more than half the U.S. patent filings originate from entities abroad.

The dysfunction on Capitol Hill has also had a profound impact on our ability to develop and build the next generation of world-class major research facilities. And that is rapidly becoming a major problem.

Scientists are part of a global enterprise, and they will go wherever the most advanced tools are located. Researchers from all parts of the world used to travel here to collaborate on experiments at our state-of-the-art national laboratories. Today, American scientists in a number of fields often go to Europe and Asia to carry out their work. And many of them leave their mark there by contributing to the innovation economy of other nations.

Authorizers need to deal with the challenges facing American science and innovation by crafting bills that are visionary and enduring, providing guidance and multiyear spending targets. They did just that in 2007 with the far-reaching, bipartisan America Competes Act.

But today, rules imposed by House GOP leaders requiring offsets for any suggested increases limit such bills to short-term outlooks at best, as with the Senate’s American Innovation and Competitiveness Act, or polemics scolding scientists and the institutions that fund science at worst, as with legislation crafted by the House Science, Space, and Technology Committee. Congress should face the reality that America’s scientific prowess is no longer a given and act accordingly.

In 1984, Ronald Reagan cruised to victory with the uplifting slogan “It’s morning again in America.” It might still be morning in America today, but where science is concerned, it’s hard to smell the coffee.

Lubell is director of public affairs of the American Physical Society and the Mark W. Zemansky Professor of Physics at the City College of the City University of New York. He writes and speaks widely about scientific research and science policy. 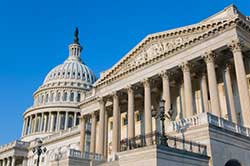