Supercomputers and Wall Coatings: The Road to Better Plasma Confinement

Reduced turbulence and instability demonstrated on the world’s most advanced stellarator.

VIRTUAL MEETING (CST) -- To harness fusion, the same energy that powers the sun and other stars, scientists have designed many types of magnetic containers to trap ultrahot gas known as plasma and fuel fusion reactions. The stellarator appears to be perhaps the most intricate: a twisty, cruller-shaped bottle that confines plasma using carefully honed magnetic fields.

With the help of supercomputers, the stellarator’s magnetic field has been designed to maximize plasma confinement—containing plasma for as long as possible and at the highest pressures possible. The world’s newest, largest, and most advanced stellarator, the $1.2 billion Wendelstein 7-X (W7-X) device in Greifswald, Germany, has adopted this approach with promising results. Researchers will present the latest findings at the virtual 62nd Annual Meeting of the APS Division of Plasma Physics.

In addition to other benefits, the W7-X design appears to reduce turbulence within the plasma. Turbulence—sometimes violent, seemingly random vibrations—can increase the plasma’s ability to escape. But careful, finely calculated adjustments to the shape of the magnetic fields in particularly sensitive places can limit this turbulence.

“Turbulence can therefore be reduced by tailoring the geometry judiciously,” said Prof. Per Helander, head of the stellarator theory division at the Max Planck Institute for Plasma Physics. “Moreover, these theoretical predictions appear to be borne out in the first experiments of Wendelstein 7-X, which raises the hope that turbulence, which has long plagued magnetic fusion research, could be reduced in this and future devices.”

Contributing to that hope is a recently discovered way to recondition the interior walls of stellarators during fusion operations, allowing experiments to continue without interruption. Scientists have long known that using elements like boron to coat stellarator interiors helps to keep the plasma free of unwanted debris and improve the chances that fusion reactions will occur. However, current methods to recoat the wall come with a problem: the coating gradually wears off during operation and requires a pause in experimental operations to reapply the coating.

Scientists have been searching for ways to reapply the coating while the machine is still running to avoid shutting it down temporarily and losing valuable experimental time. An international team of researchers from the U.S. Department of Energy’s Princeton Plasma Physics Laboratory (PPPL) and the Max Planck Institute developed a Probe-Mounted Particle Injector (PMPI) to solve this issue. The PMPI, shown in action in Figure 1, can recoat the walls by shooting bits of boron carbide into the plasma.

When the scientists used the PMPI on the W7-X, they found that it not only enabled operations to continue but helped to improve confinement as well. The researchers were surprised to find that the injected boron powder—a component of the common household cleaner Borax—smoothed out the changes in plasma temperature from the hot core to the cooler edge. This smoothing reduces the intensity of unwanted plasma instabilities that transport heat from the core and slow down fusion reactions.

“Reducing the size of these instabilities allows more energy to be stored within the plasma and increases the core ion and electron temperatures,” said PPPL physicist Dr. Robert Lunsford, leader of the international team. “The controlled introduction of boron carbide could be a way to change the overall plasma profile, allowing for enhanced W7-X performance and greater fusion output.”

Support for the PPPL research comes from the Department of Energy under Contract No. DE-AC02-09CH11466 with Princeton University. The work has been carried out within the framework of the EUROfusion Consortium and has received funding from the Euratom research and training programme 2014-2018 and 2019-2020 under grant agreement No. 633053. 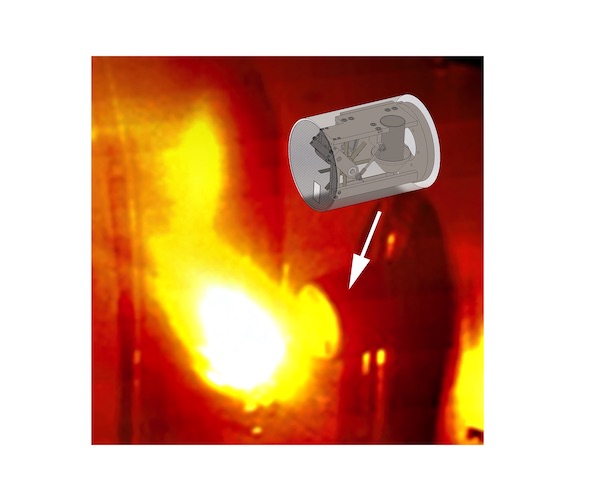