Research at DIII-D is exploring multiple uses for injecting pellets into fusion tokamaks.

WASHINGTON -- At the DIII-D National Fusion Facility in San Diego, researchers are exploring the innovative use of pellets—some made of frozen gas and others diamond shells—that are injected into the tokamak to reduce damaging outbursts of plasma and, if necessary, extinguish the plasma in an orderly fashion. The goal is to establish the conditions and supporting technology required for plasmas in commercial fusion reactors, which could produce clean, sustainable energy.

Doughnut-shaped machines like DIII-D, called tokamaks, are currently at the forefront of fusion research using powerful magnetic fields to contain an ionized gas, called a plasma. But the magnetic “bottles” used to contain these plasmas have a problem: sometimes they are too good at their job. Due to very effective thermal insulation, plasma pressure and current in the edge region can build up to cause very sudden transient events. This can result in a periodic outburst of energy or release of energetic electrons, possibly resulting in localized damage to the walls of the device.

The first challenge being addressed by pellets at DIII-D is how to quickly extinguish a hot plasma in a controlled manner, a technique known as a thermal quench. It turns out, the secret is to use diamond pellets to do the job from the inside out. A team led by Dr. Valerie Izzo, a scientist with Fiat Lux and a General Atomics collaborator, is using computer simulations to better understand how the pellets work to cool a plasma quickly while protecting the tokamak walls.

“This approach shows promise to address critical challenges as we look toward future fusion reactors, and our simulations are bolstering the experimental findings and suggesting some additional favorable features beyond those we anticipated,” said Izzo. “As the power density of future reactors grows, knowing how to cool those plasmas in a quick and controlled fashion will be critical to the operational lifetime of machine components.”

Quenching is traditionally done by injecting a large quantity of a gas or a cryogenically frozen solid into the edge of the plasma, cooling the plasma from the outside-in. One problem with this approach is as the material moves through nested layers in the plasma—known as flux surfaces—it destroys them like peeling away layers of an onion, consequently releasing the heat confined in each one outward. The diamond shell approach reverses the process by cooling the inner layers first, so that the released heat is still trapped by the outer layers as it is converted to light. The diamond shell ablates slowly as it passes through the edge of the plasma and then breaks open in the center to release the larger quantity of boron, initiating the quench internally.

New simulations show that both the total amount of ablated carbon from the diamond shell and the location at which the shell breaks open determine whether the outer flux surfaces survive while the center of the plasma cools, shown in Figure 1. Under the right conditions, the outer edge of the torus continues to confine heat until nearly all the heat in the center is converted. The simulations also show this type of quench has the unexpected benefit of preventing electrons from being accelerated to extremely high speeds.

The second pellet challenge is being addressed by a team of researchers led by Oak Ridge National Laboratory (ORNL) that is using frozen pellets to reduce bursts of heat and energy that can shoot out from the edge of the plasma and strike the wall, cooling the fusion plasma and potentially damaging the fusion vessel.

The bursts, known as Edge Localized Modes (ELMs), occur when the thermal insulation provided by magnetic fields becomes too effective, allowing the pressure and current in the edge of the plasma to build up to a breaking point. The magnetic field lines in the thin edge layer burst, and the outer layer of the magnetically confined plasma peels off like an onion. This dumps the hot plasma onto material surfaces in the tokamak in a few milliseconds. In a smaller tokamak like DIII-D, the heat deposited on material surfaces by ELMs is tolerable, but in larger devices like ITER, the international fusion project in southern France, or a commercial reactor, it could be enough to damage plasma-facing surfaces of the interior wall.

While exploring several methods of ELM control for ITER, one that is seen as having a high probability of success in the early operational phases is pellet pacing. By cryogenically freezing fusion fuel into solid pellets at temperatures near absolute zero, then firing them into the hot plasma at up to 400 miles per hour, a small ELM is triggered before a large one grows naturally. The idea is to “pace” the ELMs at a faster rate than normal to make the energy deposited from any given ELM small enough that it can be absorbed by the walls without damage. Experiments found a significant drop in peak heat flux at any one location around the vessel and that it is spread around to the outer side of the floor, shown in Figure 2.

This remarkable reduction in peak heat flux could create additional flexibility in plasma pressure, possibly by up to a factor of two, before an ELM would need to be triggered to stay below the material damage threshold.

“One of the early challenges of ITER will be ELM control,” said Dr. Robert Wilcox, who led the experiment. “These results give us much more confidence about how pellet pacing will extrapolate to those conditions.” 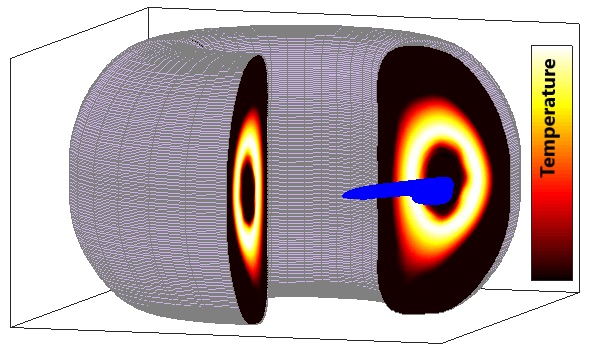 Figure 1. A computer simulation showing temperature contours of a hot fusion plasma being cooled from the inside (dark region in the center) after the release of the shell pellet payload material (blue) near the center.

Figure 2. Images of plasma emission during a naturally occurring ELM (left) and a pellet-triggered ELM (right), taken from the top of the tokamak looking down onto the floor. Triggering greatly reduces emission at the inner strike point, which is the lower stripe in each image.