Physics basis for the SPARC high-field tokamak is firmly established.

VIRTUAL MEETING (CST) -- A team of scientists from the Massachusetts Institute of Technology (MIT) and Commonwealth Fusion Systems (CFS) has completed a set of studies that form the physics basis for the SPARC tokamak. The SPARC physics mission is to create and confine a plasma that produces net fusion power and pave the way for a lower-cost path to commercial fusion energy. The new findings, which the team will present at the virtual 62nd Annual Meeting of the APS Division of Plasma Physics, confirm the basic design of the device and provide confidence in achieving the mission.

“The working hypothesis for the project is that producing a net power plasma would be a sufficient demonstration to place fusion firmly into the national energy plans and attract investment in the next steps,” said Dr. Martin Greenwald, who leads the SPARC physics group.

The SPARC device is being designed as a high-field, deuterium-tritium fusion experiment. By employing novel high-temperature superconducting magnets, it will run with a toroidal magnetic field of 12.2 Tesla in the plasma. This is more than twice the 5.3 Tesla field of the European ITER fusion experiment, but in a device of a size and configuration similar to many machines already in operation.

The SPARC team expects that the machine will easily produce more than 50 megawatts of fusion power by using only 25 megawatts of heating power, yielding a fusion gain—fusion power output divided by the external heating power applied to the plasma—of more than two. Fusion power is generated when nuclei of small atoms combine into larger ones, releasing enormous amounts of energy. But the process requires heating the fuel hundreds of millions of degrees.

Stronger magnetic fields can make fusion smaller, faster and cheaper. Magnetic fields in fusion devices keep the hot ionized gases, called plasmas, insulated from ordinary matter. The quality of this insulation gets more and more effective as the field gets stronger. Doubling the magnetic field in a fusion device allows us to reduce its volume by a factor of eight while achieving the same performance. A recent breakthrough in superconductor technology enables fusion power plants to take advantage of this by allowing them to achieve and sustain very strong magnetic fields.

Leveraging such broad progress in tokamak physics, the SPARC design draws on both empirical observations from more than a dozen previous machines and “first principles” computer modeling of the plasma. Both approaches make the same prediction of overall plasma performance and fusion gain, thereby increasing confidence in the projections.

The SPARC team will address two other crucial issues: the ability of the plasma and machine to withstand disruptions (sudden terminations of the plasma) and the ability to manage heat loads at the interface between the hot plasma and the ordinary matter at the device’s wall. These calculations are essential for operating an experiment at the proposed levels of performance. In addition to the electro-mechanical and thermal engineering of its high-field superconducting magnets, a device of this class will have enormous power flows that must be managed.

Significant margin against uncertainties in performance assumptions has been built into the design, such that well-established physics predicts that SPARC could produce more than 140 megawatts of fusion power, with a fusion gain of more than 10. Successful operation of SPARC would enable the construction of an ARC-class fusion pilot plant—a device with a major radius on the order of three meters, producing more than 500 megawatts of fusion power.

This work was supported by Commonwealth Fusion Systems and U.S. Department of Energy INFUSE. 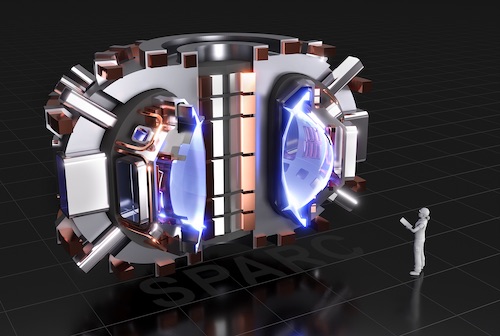 Cutaway of the SPARC tokamak engineering design. By employing high-temperature superconductors for its high-field (12.2 T) magnets, the experiment is predicted to achieve fusion gain (Q > 2 with ample margin) in a device of moderate size. Credit: CFS/MIT-PSFC, rendering by T. Henderson.