A new project unearths the history of fraud, forgery, and currency—and might clear Emperor Nero’s name

Nuclear physicists are discovering how the infamous Nero had ethical principles and why Benjamin Franklin could be the founding father of the dollar. 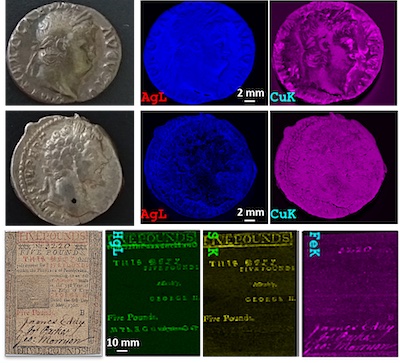 X-ray fluorescence mapping of Roman denarii. The upper panel shows the silver coins minted during the reign of Nero (37-69), while the middle panel displays the nominal silver coins minted under the reign of Septimius Severus (145-211) more than a hundred years later. The lower panel shows the x-ray analysis of early American bank notes printed by Benjamin Franklin and David Hall. Credit: Khachatur Manukyan

Take the Roman emperor Nero. “Nero was one of the most fiscally responsible of his progenitors and successors, sticking to the law in the way of having the coins minted,” said Wiescher.

By contrast, a surface and content analysis of Roman silver coins from 250 BCE to 350 CE revealed minting techniques that were invented to kick off severe currency deflation—and more easily finance wars in the empire.

The lab has also recreated the travels (and cheats) of early colonial American coins. For instance, the first silver coins minted in Boston in 1652 started as silver extracted from Spanish Central and South America. Once the coins got to Massachusetts, they were reminted with a little copper or iron added to ensure a profit!

But how did silver coins become paper dollars? The researchers uncovered new details about the introduction of printed currency.

“Benjamin Franklin and other printers in colonial America started printing money from the early eighteenth century. Franklin created a sophisticated network of printers and papermakers and, during the Revolutionary War, helped in creating Continental currency. He and his network constantly generated new ways to distinguish fake bills,” said Wiescher.

“However, the British authorities introduced forgeries of the newly printed Continental currency on a large scale to instigate inflation and a collapse of the early American economic system,” he said.

Wiescher works with historians to gain a deeper understanding of the physical evidence. The scientific techniques and analytical procedures developed in the lab could apply to many other kinds of cultural heritage besides money, from pottery to paintings.